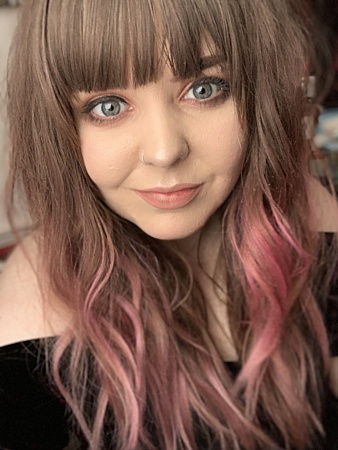 May is here already and as Mental Health Awareness Week is taking place I wanted to share my experience with anxiety and depression.

I find that my health has the greatest impact on my emotions...

I want to share my story as it’s something I’m currently working on and am hoping it will soon improve. I’ll follow up on this topic in a few months when I hope to have tips and advice to share for dealing with these issues.

I have spoken in depth about my Crohn’s disease journey in my previous blogs, But I didn’t discuss the effect my health has had on my mental health. By the time I turned 16 I had been through the majority of treatments available for Crohn’s but I never really got into remission.

One of the major triggers to cause severe flare-ups was extreme emotion - good or bad.

That meant that a basic teenage drama could have me bed bound for several days, but when I was nervous or excited I always ended up in hospital for treatment. I was in hospital in the run up to every birthday and Christmas and spent a number of those special days in hospital. If I made it out of hospital, I would likely have spent those days in bed with crippling abdomen pain.

I spent my 16th birthday in hospital, and just after that I was told the holiday my parents and I were really looking forward to, had to be cancelled as I wasn’t well enough to fly.

I found this really difficult to deal with as I felt like I wasn’t allowed to be happy. I fell into a deep depression.

The plus side to being in hospital at that time was that my doctor arranged for me to meet with the psychologist. It honestly changed my life. I didn’t know about coping methods beforehand but I was soon able to make use of relaxation techniques like yoga, meditation and mindfulness. Not only did these things help during bad times, but they helped me to better control my emotions so I didn’t suffer as much with pain when I was happy.

I continued to be under the psychologist’s care until I turned 18 and moved to the adult services.

By that time my health was declining again but I was coping okays so I took a two year break from therapy as I was in a good place both mentally and emotionally. I had accepted my life at that point. I’d entered a clinical trial in 2013 (to try and buy myself more time until ileostomy surgery) which gave me the biggest taste of what a normal life was and I had the best year of my entire life. I was in remission and was stronger than ever. I never wanted it to end. Sadly, the trial wasn’t continued and a year to the day after I started the trial drug, it was withdrawn and I was booked in for my surgery.

Once again, I became depressed as I’d had a taste of what my life could be and it was suddenly taken away from me.

I was 21, and while I was trying to get my head around having an ostomy for life, my brother was diagnosed with cancer and I hit my lowest low. The coping techniques that had helped before were no longer working and I needed antidepressants. I still have no idea how I got through but I think it was because my brother was so strong and helped me find happiness in the dark times that I kept it together until he passed away, just eight months after I had my surgery and a year year after he was diagnosed.

When I think back to 2015 it brings with it the feeling of dread and I start to panic, but I know that my antidepressants have helped me cope immensely and I am happy I have something to help me cope. I’ve had meetings with new psychologists but I haven’t yet found one I connect with like I did my paediatric psychologist. I remain hopeful that one day there’ll be someone else who can help me just as much.

My depression has been under control now for a few years and I’m learning to live with the grief alongside my new challenges.

Unfortunately, I developed a new problem that is definitely not under control. As my ileostomy has leaked constantly for the last four years, I have developed severe anxiety about it leaking in public, a fear of being alone, and I am completely dependent on my family to look after me.

At first, I started avoiding my university lectures because sitting up for long periods of time caused recurrent leaks but over time this turned into panic attacks before I’d even left my car. I was embarrassed and didn’t tell anyone about it. For six months I pretended to go to university while actually working from home or in my car because I was terrified of being alone in public.

The anxiety about stoma pouch leaks soon led agoraphobia. That is something I still struggle with now.

I also now have issues with passing out and being sick in public so my independence has completely disappeared. I’ve not been out alone in public by myself for over a year. Even something as simple as going to get my nails done means I need my mum to come with me or I just won't go.

I know it’s a big issue now so I’m on medication for anxiety too and it helps lower my heart rate so I don’t feel like I’m going to pass out from fear and it’s helping a lot. I’m also now on the waiting list for surgery to fix my ileostomy to help address the leaks, and I’m on the waiting list to see a new psychologist! So I’m hopeful I’ll be confident enough after surgery to regain some independence.

I have so much I want to do and I think one major thing that would help is not thinking of myself as a patient. I am really hopeful that by the end of this year I will be able to go out on my own again. I know that all I can do is focus on the positive as there is so much I want to be better for including my brother’s new baby being born - thanks to IVF! I want to be an aunty who can do fun things and spoil my nieces. My eldest niece is 16 and she has no memories of me before I was sick. If I can get well enough to make better memories, I will be so happy.

I have so much hope that 2019 will be the year I take control of my life.

I want other people out there to know that taking care of your mental health is just as important as your physical health and that it’s only natural to experience mental health difficulties when you have a chronic illness or have life changing surgery. I can show that healing isn’t linear and there is no one way to do it. Everyone has different things that work for them and that’s normal. It might take time, but there is a treatment plan out there that’ll work, just don’t give up because one day you WILL feel much better.

If you’re experiencing any mental health issues – you are not alone.

See you next month,

“For six months I pretended to go to university while actually working from home or in my car because I was terrified of being alone in public.” - @crohniecloth

PTSD And The Pesky Stoma