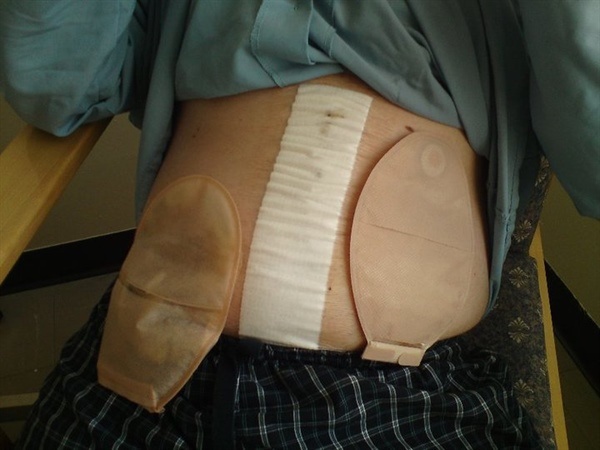 See the picture with this article? That was me in 2006.

I did not plan for it to happen. I honestly thought the day would never come for me to need a stoma.

Of course, I had been warned that I could face surgery with Crohn’s so it was always a fear in the back of my mind. But I never actually thought it would become a reality – surgery was usually avoided with a weekend stay at the local hospital, dosed up on steroids.

Then came the day of my – unplanned – stoma surgery

Until that hospital visit. There was literally a five minute window between my being told that I needed stoma surgery, signing a waiver on my life and being taken away for surgery to begin. There was no real time to panic or comprehend anything. I arrived in a room surrounded by medical professionals and then I was knocked out cold.

A stoma bag was my worst nightmare

I can still remember it like a surreal flashback: I was being transported on a bed. Numb from what was going on around me, I heard my wife’s voice. I did not want to open my eyes for fear of what I may see. In a stupor, I asked my wife if I had a stoma bag. I heard her ask the person pushing the bed but didn’t hear anyone respond. She leaned in with a “yes”. NO! My worst nightmare! This cannot be true? Really? I let the painkillers take me back into my slumber, where I could pretend this exchange never occurred.

When I woke up I stayed in bed, unmoving, staring at a clock on the wall and thinking I must be dreaming. I was so high on drugs that I spoke to nobody. I didn’t feel physically different. Nobody had yet mentioned what had been done to me. My body-shape looked normal under the bed sheets.

I had to face the reality of my situation

The reality finally hit when a Stoma Care Nurse appeared with a little blue holdall. “Ready to go through changing your bag?” she asked. This was when the reality hit. I had not even looked down at my body this whole time hoping that, by not seeing the stoma, I could somehow keep it from being real.

I swaggered to the mirror in my weakened, dazed and confused state to be confronted with the reflection of someone that looked like me - but was it?

Down my middle was a dressing stained with blood. On my left, just below my rib cage, was a stoma bag. On the right, down by my belly button, another larger bag. At this point I did not even question why there were two bags. The Stoma Care Nurse went through the bag changing process, telling me things like: “This is your stoma and this is your mucus fistula” - two words I had never really come across before.

I was kind of taking it all in but, mostly, I was just trying my best not to faint. The combination of strong medication and seeing my internal organs sticking out of my body proved to be a huge challenge for me.

I was left with the blue holdall, fresh bags on my body and the promise of a return visit the next day.

I didn’t identify with the stoma support materials

I tried to read up on my situation. But when I read the literature I had been given, I didn’t see any pictures which looked like me. All of the featured abdomens had one hole, not two, plus they didn’t have a huge scar down the middle. This confusion only increased during my many visits to hospital. Whilst prepping me for a procedure, nurses would point at my fistula and ask “What’s this?”

At my next doctor’s appointment I questioned why I was different. The surgeon advised that, in a planned stoma surgery, they usually perform the procedure via keyhole and make only one hole. This seemed quite miraculous to me, given the state that my stomach ended up in. But my surgery was not planned.

Months later, I had sort of accepted my stoma bags because they saved my life. However, I didn’t intend to keep them.

I asked if neater, keyhole surgery might be an option for me if I was to be reversed. No - it turned out that I would have to be opened up again. This news provided some food for thought but didn’t put me off at this stage.

However, before I could even consider getting my large and small bowels put back together, I needed to get better. I wanted rid of my illness completely. That should have been no problem - surely?

In the second part of this blog, coming soon, I’ll share how I came to the decision to make my stoma permanent.

How Catheter Valves Are Giving Me Back My Confidence