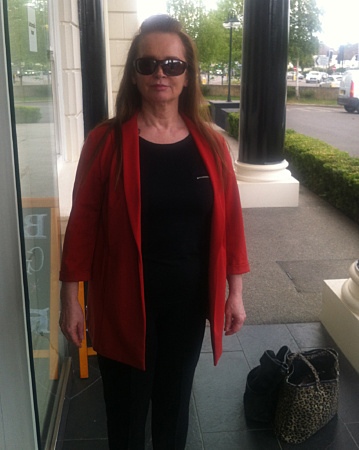 I’ve been thinking a lot about friendship lately, in fact it’s been on my mind since I first became ill back in 2013.

I’ve lost a few friends during that time and some I had known for over 20 years, but was it really a loss? It sure felt like it at the time but not now… let me explain:

The dictionary defines a friend as, ‘a person with whom one has a bond of mutual affection, typically one exclusive of sexual or family relations.’ Sounds great doesn’t it? A ‘bond of mutual affection’ and our friends can give us so much love in our lives, but sometimes our expectations are not met in times of need and that’s what happened to me.

Good friendships should ebb and flow like the tide and not be broken when the odd tsunami comes along.

Well, when I had bowel surgery at the end of 2013 it was a full-blown tsunami and I was vulnerable like never before. Having always bounced back after surgery this time it was not to be, the recovery took months. One friend who I had known for over 20 years used to call me Lyndsay, as in Wagner, the bionic woman. She said I was an inspiration, every time life kicked me down, I got right back up again. As someone once pointed out, my nickname said it all. My friend had an expectation that finally could not be met, especially when I had a heart attack just a year later. She began to become avoidant and I felt hurt. It was the worst time in my entire life and believe me there have been a few!

She hadn’t even visited me when I was on the cardiac ward for nine days and I was really hurt by that.

We talked about it, we cried and we hugged and she told me how scared she was of losing me. I got it, it frightened me too, having lost a lot of people I have loved over the years, I could really see it from her perspective. So she promised not to let me down again, but sadly she remained avoidant and when I confronted her (with as much humour as I could muster to lighten the situation) she chose to just cut me off. No explanation just silence, and she was gone.

Another ‘friend’ didn’t visit me at all during the three weeks I was in hospital after bowel surgery, and he was later to hurt me some more. He had a habit of just turning up on my doorstep to say ‘hi’ and grab a coffee, and he did just that on a day when my bag was really in need of changing. I kept my distance on our usual ‘hello hug’, embarrassed that the seal had broken and it was a bit pongy. Before I had a chance to excuse myself, he waved his arms back and forth and made a grimace while being vocal about the smell.

Hurt was an understatement.

Still getting to grips with having this horrible addition to my anatomy and failing miserably, his reaction set me back big-time emotionally.

Both of these ‘friends’ I had known over 20 years but when the chips were down, they didn’t show me the love and kindness I would have offered them. They both bailed on me when I told them how their actions had made me feel. That is not friendship, an acquaintance would do more for you!

I recently saw a talk where the speaker said, ‘If you have more than five people in your front row then some need to move back a row or two’. This is so true, how many friends do you have on Facebook? I have not far off 2000 and of course I’m not ‘friends’ with all of them. Some are acquaintances, some are friends and some are contacts. There are not enough hours in the day to have that many people in your life.

World Friendship Day is coming up at the end of July and of course it is a day to celebrate but also maybe a time to think about your front row?

If you have five dear friends then you truly are blessed. If you have plenty of people in the rows behind then you are even more blessed. Real friends just simply care, they show it and I have seen so much of that in the IBD community. Real friends allow for your foibles as you do theirs and real friends are for life not just for the good times or what they can take from you.

The photo on this blog was taken by one of my best friends, Ann-Marie, she is in my front row and it was fabulous for her to come and see me give a talk in Croydon recently. We have weathered a few storms together and, as time goes by, we grow stronger in ourselves and in our friendship. It hasn’t all been bad this journey as a ‘Bag Lady’, those who did not run away, well those relationships have bloomed and that is how it should be.

I’m thankful and grateful for everyone who has touched my life since that fateful day.

Getting a stoma has changed my life in more ways than one, including meeting some awesome people who live their lives daily with chronic illness. There is so much courage out there! Lastly, I have learnt that when people leave our lives because of their own weakness, someone will fill that gap with strength. Friends are very special indeed; we must treasure them!

“I have learnt that when people leave our lives because of their own weakness, someone will fill that gap with strength.” - @justjayhyrons