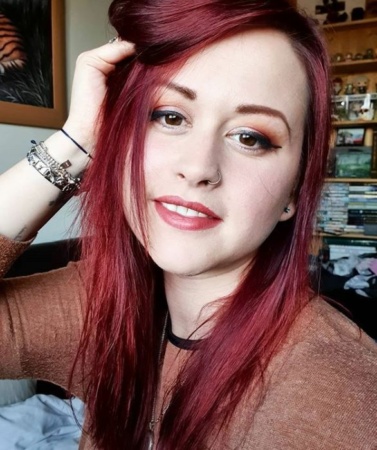 Crohn’s and Colitis Awareness Week means more to me than any other awareness week as the reason I have my ileostomy is due to Ulcerative Colitis (UC). UC is a form of inflammatory bowel disease that unlike Crohn’s disease only affects the large bowel and rectum. It does however come with a variety of symptoms effecting the rest of the body, so it most definitely isn’t just a pooping disease! This blog is an overview about my early years with it…

I started to get sick at about ten years old and was diagnosed around age 12 after suffering major constipation and excruciating cramps. I would bleed when I went to the toilet.

The first time we discussed it with a doctor, we saw the worst GP at the practice and he told my parents it was a kidney infection! He gave me antibiotics then took a urine sample; which of course came back clear. He told my parents I was lying to get out of school.

Two years later things were a lot worse and I needed blood transfusions, so they decided to give me a colonoscopy which showed I had a distinct ulceration in my bowel lining.

This meant treatment for the actual problem could finally be attempted. I didn’t know anything about it back then. Thankfully there is a lot more information available nowadays.

I remember being on so many different tablets and nobody really discussed the risks or side effects with me. When I was 14 I had a particularly severe flare. A doctor rang my parents and said I should come to hospital because I needed a transfusion and should be admitted for observations.

I distinctly remember telling my mam that I was not going in as I was really enjoying my job (work experience at a residential care home). The next thing I know my Grandad turns up to the care home and picks me up fireman-style (he was one for a long time) to whisk me off to hospital.

I was in hospital for at least a week before they decided I needed specialist care. I was placed in an ambulance and sent to Leeds General Infirmary for ten days.

I then experienced my first migraine - caused by too high a dose of steroids/pain relief and I had to have a brain scan. My dad came in with me because I thought I was dying. I also had a total parenteral nutrition line fitted and tried to snaffle proper food whenever people weren’t looking! It was here I was first told I would probably need a stoma. I had never heard about them before and decided I was too young for surgery when there were other medications I could try.

Being admitted to hospital for a week or two at a time became a regular occurrence.

I progressed from tablets to infusions and then injections, and I honestly didn’t think I was ever going to get into remission for more than a week. I never stopped trying to live my life even though it was pretty difficult at times, like missing half my GCSE studies or not learning about social interaction boundaries with people my own age.

I did manage to hold down a job in the hospital kitchens though and I interviewed for it from my hospital bed - I think I may have been given preference as the manager was friends with my dad!

I learnt quite late on that particular foods could trigger my condition and make it worse. Luckily, working in the kitchens meant I knew which ingredients were in what foods and I could pick and chose depending on the chef!

That was my first seven years in a nutshell…

“One doctor told my parents I was lying to get out of school – I actually had Ulcerative Colitis.” - @colitistoostomy