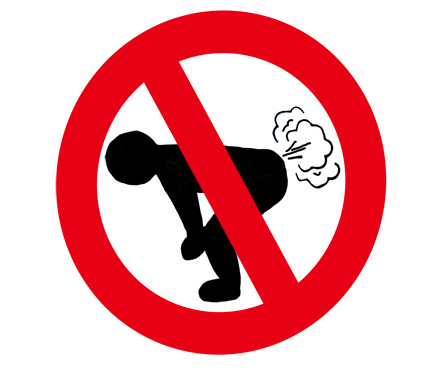 The question everybody wants to ask

The one question I get asked, time and time again, when people find out I have a stoma is “can you still fart?” and “if not, do you miss it?”

So for those of you without a stoma: the answer is a big fat NO! Or at least, not in the same way as before (via my bottom). I have to admit that, living with two stinky boys (husband and son), that I did used to get fart envy / rage.

Passing wind with a stoma

When you have a stoma, there are only two options for gas. It has to come out of your stoma, or out of your mouth.

From your stoma, gas usually leaks very slowly into your stoma bag. There are vents provided to help address this and to prevent the dreaded ballooning (where gas builds up inside the pouch) but they don’t really let that much out at a time. However, lots of stoma bags do have filters that stop there being any pong.

From time to time, some people do experience fart-type noises from their stoma. Thankfully, this usually doesn’t happen regularly. Some people report that these noises are worse if they haven’t eaten for a while – others, that it is triggered by the stoma being particularly active so it may just be a case of individual difference.

The other option now is for gas to leave as a burp. This happens to me much more than it used to. Not only carbonated drinks but nuts and vegetable skins can have a really gassy effect. I went to a concert the other week and the beer there gave me really bad hiccups because the burps couldn’t get up quick enough.

I still get blamed!

It’s funny when people try to blame a fart on me. If it’s someone that I don’t know too well, I’ll just have a little chuckle to myself but if it’s my son Callum then I remind him that I have a Barbie butt (where the colon, rectum and anus are removed and all holes to the outside world sewn up) and so it couldn’t possibly be me!

Now and again, I do miss a good fart

I used to miss passing wind, but now not so much. I have developed new techniques to move gas when it’s trapped - a cup of peppermint tea or a good wriggle. Just sometimes, though, when that doesn’t get things moving, I do still wish I could just let one rip.

A note from our Stoma Care Nurses regarding the passing of wind, mucous and stools once you have a stoma:

Generally speaking, Michelle’s comments are correct for her type of surgery and stoma. Passing wind, mucous or even faecal matter via your anus can also be normal though and will depend on your stoma and the type of operation you have had. Some ostomates may still have a section of large bowel connected to their anus. Even though the stoma is producing the majority of waste, the bowel left behind can still produce mucous so some people may still get the feeling that they need to go to the toilet every now and again. There might also be some faecal matter left behind if the surgeon didn’t fully wash the bowel out during surgery, and over time it will work its way out. If you have a loop stoma, you might get some wind working its way through too. All of this is normal and nothing to worry about.

Since having her stoma, the one question everybody asks Sonikmummy seems to be: “can you still fart?”

Returning To Work After Stoma Surgery