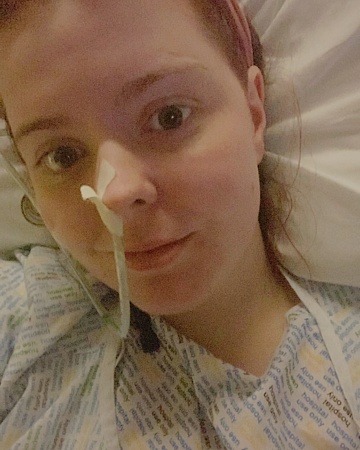 I’m sorry it’s been so long since my last post, but there is a big reason behind my unplanned break.

The surgery I had to refashion my stoma had some major complications.

The issues are still causing me trouble and are likely to impact my life for a long time to come.

Firstly though, I would like to say that just because I regret having the surgery, it doesn’t mean that others do or will. I might feel differently about it in the long run – or even given another three months or year from now.

My stoma refashioning surgery was planned for the third week of October. Meaning I had about three weeks to prepare after my Florida vacation. On the list of things to take care of was some dental work, so I could go into my stoma surgery and recover without anything hanging over my head… which in theory was a great plan, but not so much in reality! I ended up having two wisdom teeth removed, alongside a root canal and was extremely sick for almost two weeks.

By the time my hospital admission arrived I was 8lbs lighter and understandably run down. Something wasn’t right.

But since I didn’t have anything other than an ‘off’ feeling, we decided to proceed with the surgery. If you’ve read my other posts, you’ll know why I needed the refashion, but as a little reminder: my stoma was very retracted with the hole pointing upwards and to the left rather than into the bag, meaning there was a lot of output on my skin that completely digested a 1inch ring around my stoma. I was leaking most nights and multiple times per day. It was very painful and impacted my quality of life. My Crohn’s was pretty stable though, so I thought the surgery would be minor in terms of the recovery, and that I’d wake up with a better quality of life.

My small intestine lost blood supply on two separate occasions, meaning that the first stoma created had to be removed, as did the second, alongside three feet of intestine to find an area that wasn’t as badly damaged.

I actually felt great when I woke up and refused pain medication - within three hours I was eating and drinking plus I got to the bathroom easily too! It was the best I’d ever felt after surgery and I was so happy with the results as my new stoma was perfect… but it didn’t last long. Less than 36 hours later the intestine right behind my stoma twisted and led to some scary problems. I was thirstier than I’d ever been in my life and I kept vomiting, but the doctors thought I would improve at home.

The thirst and vomiting continued at home, but I was urinating less and less which also meant my bag was producing less output - within a day and a half I became so dehydrated that I couldn’t stand without passing out, and breathing became difficult too. My mum called an ambulance.

When the paramedics arrived, I was in an awful state…

I was getting worse by the hour, so they took me to the nearest hospital. I needed the help of both paramedics and my mum to get down the stairs, and I completely collapsed. Every time they managed to wake me up, I was delirious and passed out again within seconds. My heart rate was through the roof and my blood pressure was dangerously low.

I was blue lighted with sirens to the resuscitation ward…

I hardly remember anything from the following six hours, but I was later told that I had been admitted with septic shock, was going into a coma and my kidneys were failing because I was so dehydrated. I had drunk SEVEN litres of water the day before, but as I had been so sick and the twist didn’t allow water to move through my body, I hadn’t absorbed any of it!

I was given six days for the twist to disappear by itself – I hadn’t eaten anything for ten days and I had no idea I wouldn’t eat for another three weeks. Nothing they tried worked and I was getting weaker by the day. My new surgeon spoke to me and decided that an emergency laparotomy to fully open me up, get rid of all adhesions and scar tissue that was forming and remove the twist alongside another foot of small intestine and reforming my stoma for the fourth time.

The surgery happened within three hours of that conversation and it was touch and go due to how ill I had become so when I woke up I was in a lot of pain and found it difficult to breathe without the aid of oxygen. I couldn’t eat, drink or stay awake for longer than 15 minutes at a time so I spent five days in the ICU. I was kept in hospital for three weeks on that admission because I was so unwell, and I had to rely on total parenteral nutrition (TPN) which is a method of feeding that bypasses the gastrointestinal tract.

I was basically a shell of a human being.

They let me home at the end of November and I won’t lie, it has been such a difficult time going through all of this, second only to my brother passing away. I have required care to help with washing and eating, I’m reliant on a wheelchair when I leave the house and I am now terrified of everything that could result in a hospital trip.

My new stoma is bigger and flatter than expected so they think I need another surgery to fix that down the line (a LONG time from now if I have a say) so I’m leaking a bit again, which isn’t ideal considering that was the one thing I wanted to stop happening. It feels a bit like I’m back at square one despite everything I’ve been through.

I knew there were risks and that they were much more likely to occur with me since I’ve always had a problematic case of Crohn’s, but I had hope.

Right now, I feel like I was greedy for wanting to stop the leaks, when everything else was stable. I took a huge risk and lost the lottery with all these complications, but I do know that the next surgery could hold a win and result in the best quality of life I could imagine. That hope keeps me going every day.

I’d like to think things will improve and that I will change my mind about the decision I made, but I might not, so I’ve come to accept that it was better to take the risk rather than live life wondering “what if?”

I’m able to work again so I’m back from my break and I’m very excited to share the next blogs I have planned. I’ll keep you all informed on how my recovery’s going!

See you next month,

“Complications from my stoma refashioning resulted in septic shock, a near coma and my kidneys failing.” @crohnieclothing

Exercise And Fitness With A Stoma