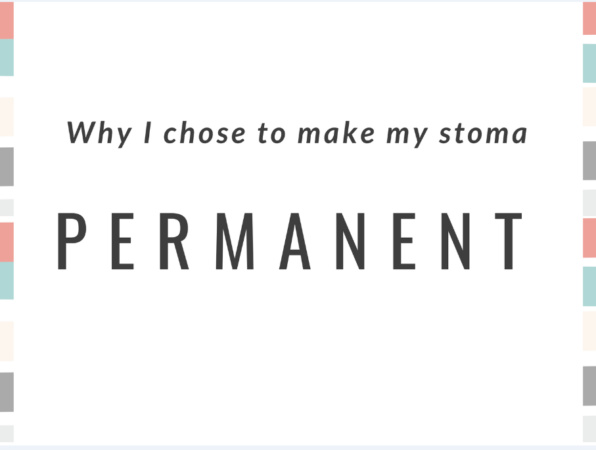 I’ve had a permanent ileostomy since 2016. Prior to that, I had a J-pouch and was expecting a temporary ileostomy to give my J-pouch time to heal. People often ask why I opted to have a permanent ileostomy instead - there are several reasons for my decision and I’ve decided to discuss them in this month’s blog post.

My J-pouch didn’t seem to be healing well, so I didn’t fancy my chances with a temporary stoma – it would have just prolonged my suffering until I had to lose the J-pouch anyway, and could have caused more damage in the meantime. This was realised when I was admitted to hospital with increasing pain and scans showed my J-pouch lining wasn’t just inflamed and swollen, but infected. There was no doubt, after seeing those scans, that having it all removed to form a permanent end ileostomy and Barbie butt was the way forward. But my surgeon had to take my case to the board of directors for a decision. (Read more on this in Stephie’s post: Why My Stoma Was Worth The Fight)

Without those scans, I may have gone in for temporary stoma surgery…but once the operating team had seen the state of my J-pouch they would have had no choice but to create a permanent stoma – and I would have woken up to quite the shock! So I was grateful for the doctor who pushed for those scans, as it meant I was able to mentally prepare myself prior to the surgery; I already knew what the outcome would be.

I did lots of research into permanent vs temporary ileostomies

Prior to meeting with my surgeon to ask for a permanent stoma, I had also done my research and noticed that a lot of people found loop or temporary ileostomies a bit more troublesome than permanent ones and that the risk of cancer increases if the stump is left in place. I also really didn’t like the idea of mucous and the sense of urgency to pass the mucous – that didn’t appeal to me in the slightest!

So personally I just felt like it would be a vicious circle going round and round if I had a temporary ileostomy then a reversal. I just wanted to be as healthy as I could without the risk of Ulcerative Colitis coming back!

I would always suffer with the side ailments that are part and parcel of having Inflammatory bowel disease but at least I wouldn’t have the pain, the blood, the urgency, the accidents and ultimately the worry that comes along with the active disease.

I truly feel like I made the correct choice

Now living with my Barbie butt and my forever stoma, I truly feel like I made the correct choice for me. I understand it might not be the right choice for everyone, and that - for those who do go permanent - your reasons may be different to mine, but that just goes to show how unique we all are and how our diseases may affect us differently.

“Now living with my Barbie butt and my forever stoma, I truly feel like I made the correct choice for me.” -@colitistoostomy

Cinderella With A Stoma – A What-Scopy?