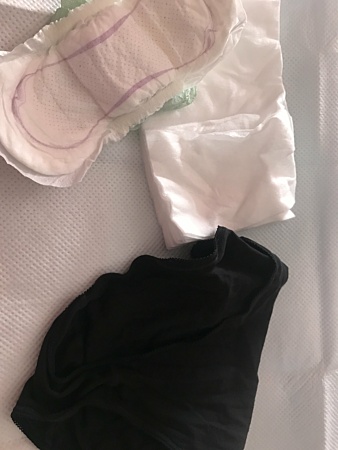 One of my earliest memories is being pulled out of the classroom because “Anita has done ‘IT’ again”. Done what? I hear you ask? Wet myself. I must of been 5 or 6 years old at the time and I always denied it, because I genuinely believed I hadn’t.

It was like once my brain said “pee” I went from zero to bursting within seconds, I had a funny sort of kneeling-down-thing I would do. I would then have to kneel very still and stay put until the urge had gone away. As you can guess I wasn't popular at school. Sometimes a little bit of wee would escape but only a tiny bit, and that would be okay until I found a toilet to go to. My Mum used to shout at me all the time, constantly asking if I needed to go pee. I tried my hardest.

Mum would restrict my drinks in the evenings as I was a bed wetter, which to my shame, didn't go away until I was about 15

Usually my last drink would be with my evening meal. I used to go to the bathroom to wash my face and suck the sponge because I was so thirsty. I would wake up in the night feeling cold, and the bed would be soaking. Sometimes I would even dream that I was getting up and walking to the toilet, then I’d pull my pants down and start peeing…. only to wake up and realise I wasn't in the toilet.

Mum took me to various consultants but to no avail - nothing seemed to work. I had suppositories, I had medicine to take… no drinks and I STILL wet the bed. Sleepovers were out of the question. The consultant said I would grow out of it eventually. In hindsight it wasn’t dealt with that well at all. I was often shouted at and smacked for wetting the bed which of course only caused more anxiety.

As I grew up I realised that alcohol really didn't help the problem – I’d be peeing every 5 minutes!

After a few drinks my bladder would do whatever it wanted. The minute it was full it would begin to empty. I always had to stay close to the toilets – I’d be peeing every 5 minutes and sometimes I wouldn’t actually make it to the toilet.

Pregnancy and labour caused more problems (my son is now 24). Sneezing, coughing and even laughing could cause me to leak. This is known as ‘stress incontinence’ - I did those pelvic floor exercises all the time but it never helped. On top of all this I kept getting urinary tract infections. At one point I was put on a low dose of trimethoprim for 6 months to see if it would help… it didn’t!

I was so ashamed. I had gone through various tests as I was getting bladder infections regularly and my choices of jobs didn't help much either. I worked as a home carer and some of the ladies wouldn’t let you use their toilets. I also worked as a driver, picking up cars and taking them from one point to another. Both jobs were high pressure and you didn't have a minute to stop for the loo. There were times when I literally thought my bladder was going to burst and I was just going to have to pee in the car. I did pee into a carrier bag once on the M25 – I was on my way to a gig and got stuck in the snow.

I had various tests and procedures done over the years, I even had weights put into my urethra to stretch it and to help me empty my bladder fully. I felt so alone and I couldn't even tell my best friend. I constantly worried about smelling of pee and took extra pants with me when I went out.

I never really spoke to anyone else about this and accepted that this was “just my life”. It was far too humiliating to tell anyone and even when I met my husband I kept it hidden from him at first but I always had to get up to pee at night, somewhere between 3 and 6 times. When it reached 6 times, we knew I had an infection.

There is such a stigma to being incontinent, and yet it’s us women who are most likely to suffer with it

This is due to pregnancy, childbirth and the menopause. There are many different types of incontinence, including stress and urge incontinence. It could even be due to an overactive bladder, a weak bladder, muscles or nerve damage.

If you are having any of these issues I’ve mentioned, then please visit your doctor

There is so much out there that can help you now and you aren’t alone, honestly. I am now much more open as I realised there are many, many women like me who are incontinent and are suffering. Speaking about my own experiences may prevent others from going through the same things. There is help out there.

Speak Up About Your Stoma; Even If Your Voice Shakes