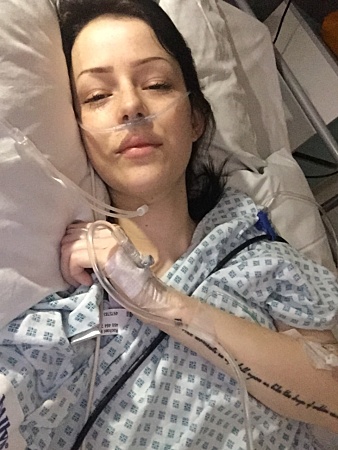 In the fifth instalment of Rachael’s blog series ‘Cinderella With A Stoma’, she continues to share her  stoma surgery hospital experience. To catch up on her journey so far read her previous posts.

I’d just been told by the medical team that my colon was at risk of perforation and I’d need stoma surgery, pronto.

She asked me to bend forward, and then backwards, so she could determine where to mark me with a sharpie, and then she preserved it with dressing.

Thus I was left to await my fate…as I was, the time my brother was given his first spud gun!

In the corner of my eye lay a lone ostomy bag for me to examine. Holding it up to my belly felt surreal; this was really happening!

I was immediately marked as nil by mouth and told my surgery would take place the next morning. Abandoned and starving, I lay staring at the ceiling all morning until a porter finally turned up.

To assist the porters in moving my lifeless body once I had – temporarily! - dropped off the mortal coil, they slid a blue sheet under me and wheeled me off to the theatre.

In the prep room the anaesthetist did her best to reassure me by relating the needle jabbing into my spine, to my tattoos.

“You’ll feel a sharp scratch and some stinging, then you’ll need to quickly lay down… and remember, don’t move!”

Those years of being shot at by my brother with tiny bits of stale potato had prepared me for this moment and in three, two, one, I was back in the room.

“Rachael, just breathe,” said a nurse, as she tested my gag reflex before pulling the breathing tube out. Then she asked the golden question, “Are you in pain?”

“Seriously? Try running barefoot on a treadmill made of Lego and you’ll have your answer!” I replied, in a slightly conscious and sarcastic tone.

Unsure if I was genuinely alive, I watched as a nurse removed the needles from my wrists and hands; at which point I was starting to feel frustrated and uncomfortable.

It was late evening by the time I reached my room and I asked one of the nurses to return my phone from the safe. No time like the present for a quick selfie, I thought. Soon after, I fell asleep, thankful for my morphine pump.

Little did I know this was going to be the best nights sleep I would have in weeks.

My mum came to visit the next morning, and I felt surprisingly good considering the whole ordeal. I was offered my first bite of food in almost 24 hours, and I inhaled the egg mayo sandwich at breakneck speed. It was probably the worst idea I’ve had since the time I popped a confetti balloon on a very windy morning outside a café, hitting several commuters who were trying to eat their breakfast.

All seemed ok until I was heaved out of bed by two nurses in a bid to get me moving, that’s when I realised something wasn’t quite right.

…To find out what, tune in next month to read my sixth instalment of Cinderella With a Stoma

“In the corner of my eye lay a lone ostomy bag, holding it up to my belly felt surreal, this was really happening.” – Rachael Kin