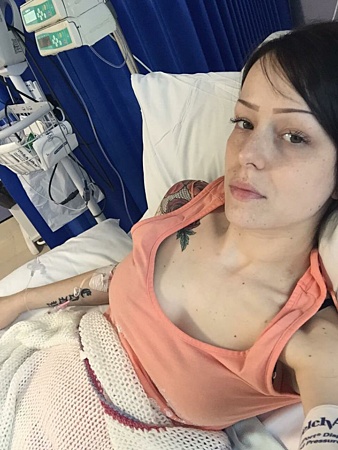 Once I’d settled in at A&E the ice-cream men left (OK, they were actually paramedics - but I was delirious with pain!) and, in a desperate attempt to stay conscious, I began to eavesdrop on an argument between the police and a drunk individual who had managed to cut his thumb off!  “Nice ink, sister,” said the thumb-less individual, eyeing my tattoos, as I stumbled from my makeshift bedroom on the A&E ward.

I walked hastily towards the lavatory, desperately trying to concentrate on not losing the contents of my bowel on the floor in front of the police officers.

The situation between the four-fingered drunk citizen and PC ‘FedUp’ escalated rather quickly; on my return they had restrained him in a position that I thought only Darcey Bussell was capable of. I retreated to my bed, where I tossed and turned on the plastic mattress, limited to very few comfortable positions as I was strapped to a fluid stand.

I was left for six hours with a severe bloodline infection before they realised I needed antibiotics!

At around 3am, the Junior A&E Doctor finally came to say hello and figured this out. The one thing I remember about this doctor is that he had the most awesome long curly hair – like those kids from Hanson. He began to tell me the results of my bloods and as my inflammatory markers were close to 70, I was finally wheeled out of A&E and off to a different ward. Singing “Mmm bop, Bub da, Do bop” as I went.

The new ward reminded me of my primary school where we had an old terrapin, and I learnt to grow water cress, and once wet myself in front of the whole class.

The colourful curtains were drawn before I was ready and the sun light beamed through the windows, leaving me looking like a bulldog chewing a stinging nettle.

“Toast or cereal?” asked one of the ward staff as I tested the buttons of my adjustable bed. I was often inundated in the mornings with such bizarre questions from my daughter (who was eight at the time), so deciding between toast or cereal was much easier than explaining to her why frogs don’t eat cheese!

At the foot of my bed stood the surgeon, demonstrating the structure of a large bowel with his hands. Looking back, I’m glad he explained the worst to me before the worst actually happened.

Still having no clue what ward I was actually on, I shuffled out of bed in search of a clue.

The voice of an angry man echoed at the end of the corridor, where I was reunited with the hungover gentleman from the night before. He was definitely less drunk but he was still arguing - this time with a nurse. I still wonder to this day, what happened to his thumb - did they retrieve it? I hope so as I’d hate to be thumb-less and angry!

I was moved to a plush modern part of the hospital and given a strong course of steroids and antibiotics. Luckily, I had my own room and could poop myself in peace.

Mum visited with a bag of fresh supplies and my daughter kindly donated her personal DVD player to me and picked out a bunch of my favourite films. It wasn’t long before Mum started throwing things at Dad though; this time for using the patients’ toilet instead of the public one (“That’s Rachael’s toilet!”), and then for falling asleep in the chair in the corner of my room.

I had a lot of visitors, cuddles and cards but despite all the well wishes, the treatment started to fail.

All hope was placed on a particularly difficult to pronounce bloodline infusion called Infliximab.

A ‘miracle’ treatment that had worked for many - but blood tests the next day revealed I had no response to it.

The medical team crowded at the foot of my bed and explained that surgery was necessary.

My inflammatory markers were still extremely high and there was a fair risk of perforation, so they wanted to get me into surgery as soon as possible. They explained that all options had been exhausted…and, at that point, so was I.

“All options had been exhausted…and, at that point, so was I.” – Rachael Kin

Being Diagnosed With Bladder Cancer