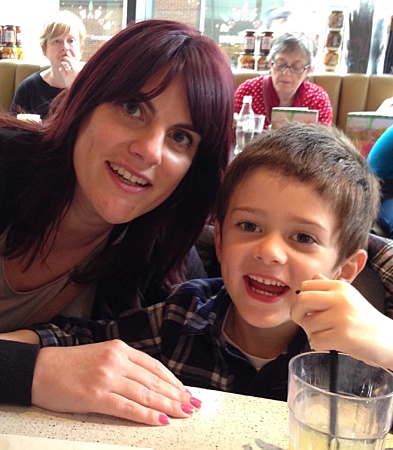 To my son, my stoma bag is normal

My son had just had his first birthday when I first got my stoma bag, so he has effectively grown up with it. To him my bag is normal, despite no one else in the family having one. His first question about it was “Mummy, when will I grow my bag?” and the easiest way to explain was to say that he already had a bag…in his bottom. Mummy’s bottom had broken, so the doctors had to move my bottom to my tummy so that the food can come straight out. Obviously, when he is older I will explain in much more depth but sometimes I think we over-explain things to kids, who are overwhelmed by new information everyday. After-all, I don’t want my son to be scared of having tummy aches.

As an example of a slightly older age, my niece is 11 now. She had known I had been very poorly so she understood that I needed a stoma bag to get better. She was fascinated by it and wanted to know how it worked. If we are going out for the day, she still sometimes asks if I’ve remembered to put my bag on.

With children, anything goes

We seem to worry about telling kids the most but, in my experience, they have been the most understanding and I think it has something to do with body image. Children have only known their bodies a short time; basically anything goes because they don’t know any different. I know people whose kids even decorate their parent’s bags with colorful drawings.

At the other end of the spectrum are the over 70s: not only are they from a different era but they have been used to their bodies a long time. I think this is why many of them take longer to adjust to having a stoma and often need assistance with looking after it. Whenever I am in hospital now the staff are often shocked that I self-care for my stoma. I’ve even been called a superhero for coping with it. To me it saved my life and if anything, made my life easier.

'We worry about telling kids the most but, in my experience, they have been the most understanding' - Michelle

Things That Matter To Me: Caz’s Stoma Story