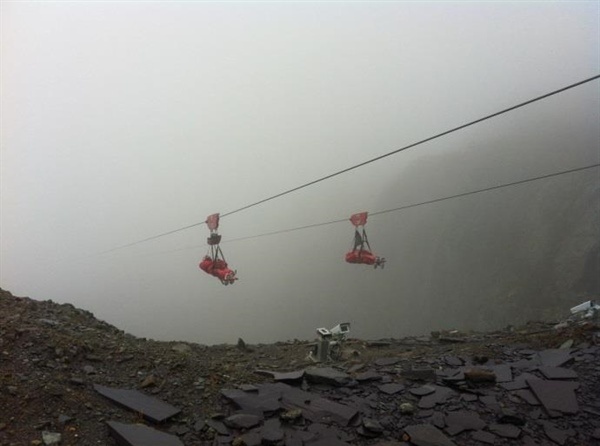 The longest zipwire In Europe

When researching my next adrenaline rush, I came across The Longest Zipwire in Europe, Fastest in the World... Velocity! An experience right on my doorstep, in North Wales.

Arriving at the venue, I was unsure what to expect. At the observation area, overlooking a lake, I could trace the route of the zipwire. It became very clear how high it was because I couldn’t see the starting point. This made it hard to gauge what laid ahead. Should I have been worried? I wasn’t… yet.

I kept checking if my stoma was OK

Putting on a red boiler suit and a strange red apron-looking device, I kept checking if my stoma was ok. I was worried the bag would go mental with me lying on it when attached to the zipline.

I travelled to the bottom of the quarry on a much shorter line, before reaching the big one I’d use for my actual descent. Suddenly the apron made sense: I was clipped to the short line and told to lay forward onto the apron. As feared, all my weight went straight onto my stoma bag. But then my feet were put into two loops and suddenly, by some weird system of straps and magic, I became straight to the point that I didn’t feel like I was laying on anything, including the bag. I was floating.

I was flying…with no weight on my bag

The pin holding me in place was released and I was off. Flying close over treetops, gliding effortlessly like a bird, I swooped into the landing area, gradually slowing to a stop. Feeling the rush of adrenaline in my system, I wondered how different the actual, big zipline would be. Would it be faster, would it be as smooth? A truck took me for a bumpy ride to the summit. My nerves started to kick in as the surrounding landscape disappeared into the clouds.

I got to the top just in time to watch two people disappear into the mist. It was like a scene from a horror movie, unnerving.

I was the last to go. Laying there, looking into the mist, I felt myself bob about as other people were being detached at the other end of the line over a mile away. My nerves start going mental with anticipation with the unknowing of when I would be released.

My stoma did not get in the way

The pin released and the flight began. My heart was in my throat as the speed increased. My cheeks flapped about in the wind like they had during my skydive experience, only breathing was far easier this time.

Speeding down the line, I caught glimpses of the mountain as it rushed past me through the mist. Tingling from the windburn and with numb ears, I was unsure at what point I would clear the cloud base and be able to tell how high I was.

Suddenly the world turned to colour. Greens of all shades appeared as the surrounding mountains and farm fields came into view. The lake below looked the bluest blue you could imagine. With the landing zone fast approaching, I spread my arms out to slow down.

Once on the ground, I looked back at the lines disappearing in the distance, thinking about what had just happened. It was an amazing experience and most likely the closest thing you can get to being a bird. The views from that height were amazing. I was itching to get home, to review the footage and relive my flight again.

Most importantly…I managed to prove to myself yet again that my stoma need not get in the way.

Video of this experience can be found here. 7 mins in gives you a POV of the closest thing to flying.

See what Billie has been up to since Stoma surgery

We Need To Talk About Incontinence