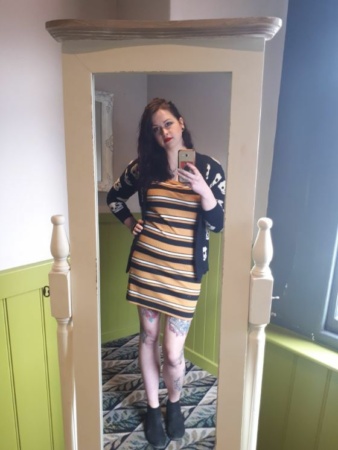 No matter what hand we are dealt in life most of us have body image issues and no matter how trivial they are, they can be quite a big deal for the person living with them.

I have body dysmorphia disorder (BDD) which more than likely stemmed from having ulcerative colitis from such a young age, having chronic constipation along with it, and having to take the ‘devil’s tic tacs’ more commonly known as steroids.  Also, let’s face it the late 90s and early 00s diet culture was rife.

I blame society entirely for how I view myself mentally.

I have for as long as I can remember despised my stomach; it’s either been too round, too lumpy or surgery scars have misshapen it. For instance, my stomach didn’t heal very well from my stoma surgery and the left side has always seemed like it stuck out more than the right, in fact I still think it does. I also feel like the left side has what I guess could be described as an overhang, it isn’t really as such but with my BDD I see things on myself worse than they probably are.

A lot of people worry about how their bodies will look once an ostomy bag is attached to their abdomen. It’s a fully valid reason to worry and something that really played on my mind.

I remember three years ago getting out all my clothes and sticking on the ostomy bag and trying on everything I owned and I mean EVERYTHING. Now I am not fashionable in the slightest and I really dislike shopping (to my husband’s delight) but I still had a lot of stuff that I ended up getting rid of because I felt uncomfortable.

The main thing for me was actually how 00Steve (my husband) would see me; would I still be attractive or desirable?

He had seen me through my varying stages of weight gain and loss; but his wife suddenly having a bag of waste permanently attached to her stomach could have been something he would struggle with. It wasn’t just a scary prospect for me but for our entire future together.

I stood in front of him completely naked with this bag stuck to me and I waited for him to look repulsed or freaked out as I asked him if he still found me sexy. He looked me up and down and said that I was of course still attractive, and he would get used to the bag in time. And just like that, I felt as though it was the equivalent of having a new haircut and it being slightly shorter than he was used to!

I felt relieved that he didn’t recoil in horror like you may have heard or read about in groups online and three years in he still hasn’t changed his view which is unbelievably reassuring!

I am one of those people whose whole emotional self worth is tied up in how other people view me. Regardless of how much I hate that, sadly I know it won’t change anytime soon. The thought of someone else other than 00Steve seeing me naked along with my bag actually terrifies me.

It surprisingly took next to no time at all for me to be very comfortable with my ostomy bag and I learnt which clothes make me feel better about my body. The bit that surprised me the most was actually the fact that I hated my stomach a little less. Sadly my stoma is on the flatter side rather than the shall I say lumpier side but I do feel better about my stomach now and I am not sure that is something I ever thought I would be able to say.

“I have for as long as I can remember despised my stomach; it’s either been too round, too lumpy or surgery scars have misshapen it.” @colitistoostomy

Flares - And Not The Kind You Wear