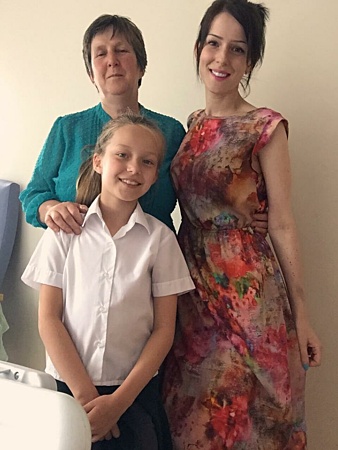 In the sixth instalment of Rachael’s blog series ‘Cinderella With A Stoma’, she continues to share her experience of stoma surgery. To catch up on her journey so far read her previous posts.

I took a seat in the bedside chair for the first time since my operation and a cold rush of ‘panic vomit’ swept through my body. I quickly grabbed a bowl! Sweating and shaking I fought back the urge rather than just let it out, and climbed back in to bed.

Leaving me alone with a morphine pump wasn’t a good idea as I liked to press the button for the sake of pressing a button!

After all, asking me to only use it if I need it is like saying here’s a jug of ice, only use it for its purpose and don’t throw it over your brother in the shower!

It was a contributor to my sickness, for sure.

By the time they wanted to remove the pain relief my pain had actually increased but I was told by the pain medication team that I should be making improvements.

By the third night the urge to throw up was getting stronger and so was the pain in my stomach.

I hadn’t eaten since the day after the operation and even water was hard to swallow. I felt full and bloated like my dad that time he stopped to get a doner kebab on the way home from a Sunday lunch.

I stared in horror at the hospital tray balancing a bowl of soup and a crusty roll.

“Come on Rachael,” Mum said in a frustrated tone. She began to break my roll up into bite sized chunks. “If you don’t eat they’ll start tube feeding you.”

Worried that she would threaten to replace my Christmas presents with a lump of coal, I force fed myself half the roll and a spoonful of soup.

Later that night I hit rock bottom. An on call doctor flicked through my paperwork at the foot of my bed and advised anti-sickness tablets, with no energy to argue I swallowed the tablet. Less than 5 seconds later I finally threw up.

This happened again for a further two nights until my surgeon visited and sent me for a scan.

Low and behold, I had an ileus, or in layman’s terms: my only remaining bowel wasn’t working!

“You’ll need a nasal gastric tube for the next few days,” said the doctor on my return. And there I was at midnight with two nurses alternating between my nostrils until finally the tube went in.

Eyes watering and gagging from the feeling of plastic against my tonsils, I genuinely felt like this couldn’t get any worse, but at least there was some relief: ice cream. Ice cream became my best friend as it was the only thing I could eat for a while and eventually after having the contents of my stomach pumped out, my small bowel finally started to work!

Preparing to go home felt strange after spending three and a half weeks in a hospital bed.

Due to the ileus I was still on a whopping amount of oxycodone, and while I waited for the pharmacy to bag up my medication, there was one last tube left to remove…. the drain that had been hanging out of my stomach since the operation.

I clenched my mum’s hand as the nurse removed the dressing.

‘’Surely they can’t just pull that out?!’’ I thought to myself as I quizzed the nurse on how much of the drain was on the inside. Looking back on the situation now it was fairly comical as she shrugged her shoulders at me and said, ‘’There’s only one way to find out.’’

It turned out the drain was at least seven inches and I had to double check my bladder wasn’t on the end of it once it was removed!

I have to admit, that was one of the worst experiences of my life!

The journey home felt surreal, and everything seemed very distant as if I’d been locked away for years. Everything sounded louder than usual and my eyesight seemed to have gotten worse. I knew I wasn’t well enough to have gone home that day, and I was right.

Less than a week later I would be readmitted back into hospital for the hardest part of my journey.

“Preparing to go home felt strange after spending three and a half weeks in a hospital bed.” – Rachael Kin