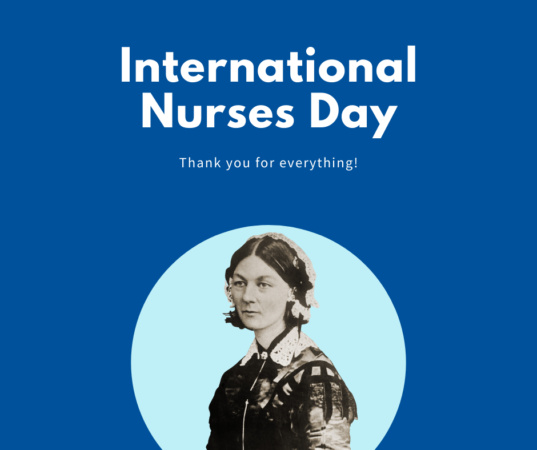 “The spotlight is on us: nurses and midwives are being celebrated not just in England but across the globe. This is the chance to highlight our vast and varied skills and the work we do, and to ensure our professional voice is heard and represented at the heart of all health and care decisions and policy.” Ruth May, Chief Nursing Officer for England

Our plan to celebrate this event in May 2020, like many other planned events around the world, was cancelled due to the global Covid-19 outbreak. A year on, we are still living with this pandemic and unable to celebrate this event as we would like. In this past year, nurses like myself have shown that we are more resilient, brave, and determined than ever.

Florence Nightingale would be proud.

Florence Nightingale was born on 12th May 1820 in Florence, Italy and was named after the city of her birth. She was born into a wealthy family and had a strong desire to devote her life to helping others, like many nurses. Due to her family’s wealth and class, they were opposed to her becoming a nurse. They felt that she should become a wife and mother as was expected during that time.

Instead, Florence educated herself in the science of nursing and set about travelling. It wasn’t until she was 30 years old that she became involved with actual nursing care. The Crimean War in 1854, saw fighting between Russia and Turkey, and soldiers from England and France served on Turkey’s side.

Many battles took place and countless were injured and killed.

The wounded soldiers were sent to old, dilapidated buildings with no beds or blankets, limited medical supplies and poor hygiene. There were a few doctors who took days to get round to seeing them; many wounds were left untreated. Many soldiers died needlessly because they couldn’t get the care and attention they needed. The Minister of War, Sidney Herbert, knew Florence Nightingale and wrote to her to ask her to take a team of nurses to Scutari in Istanbul.

Florence took 38 women with her, all of which she trained herself.

They implemented handwashing and hygiene practices, scrubbed the floors, washed bedclothes, and made the wounded men feel comfortable while attending to their injuries. In 1855 Florence Nightingale dramatically reduced the death rate of soldiers by asking the British Government to improve defective sewers and ventilation in the facility. Florence believed that good nursing care was mainly due to providing good food, adequate medical supplies and a healthy and clear environment.

Florence was nicknamed ‘The Lady of the Lamp’ in a report posted in The Times.

She was also awarded a diamond brooch by Queen Victoria for her services to the soldiers in the war, and in 1855, the Nightingale Fund was established for the training of nurses. Florence’s notes on nursing and her words were considered a classic introduction to nursing, many of her practices are still taught today.

Florence Nightingale died in 1910, aged 90 years old. Her hard work, knowledge and passion saw the creation of the nursing profession. Thanks to her, our world has known many other inspirational nurses, including:

We thank you for your work and for being the inspiration of nursing, a globally recognised honourable profession. Nursing has come so far since the time of Florence Nightingale, and I know that every nurse feels very lucky and grateful to be providing such a vital service to everyone, no matter who they are.

Pouch Changing And Adjusting To Life With A Stoma: My Experience