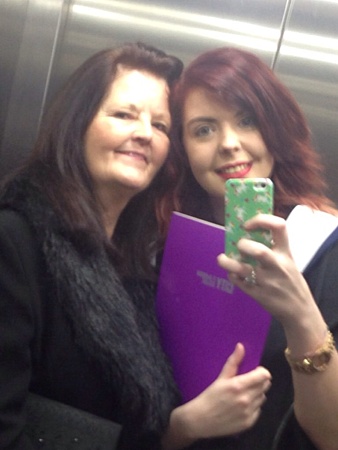 Hello again SecuriCare Blog readers! I hope you’re well. I’m here today to share with you a conversation I had with my mum about what it’s like for her, having a daughter with Crohn’s Disease and an ileostomy. We very rarely discuss what it’s like in detail because I’ve been diagnosed for 11 years now so it’s just normal to us but I feel like this conversation has really shown me how much my parents have done for me, alongside giving me an insight into her recommendations for other mums with children who have chronic illnesses.

How would you describe my childhood before diagnosis?

You had an idyllic childhood where you had a great time with your friends. You were always healthy enough so it never even crossed our minds you’d have anything affect your health, apart from some minor asthma that was always really well controlled. We just thought that all of the little sore stomachs you had were because you were tall and we assumed you were developing early and they were cramps from your period.

Did you notice any red flags before my health deteriorated?

You were always very white and pale, to the point people would comment on it, but you’d always been like that. Although we’d mention it to the doctors, often they blamed it on an iron deficiency - which was one of the worst things they could do because the iron tablets irritated your inflammation more and you ended up much sicker than you’d be without the iron. Your eating habits also changed so we were worried about bullying or an eating disorder and we had you at the doctors regularly to get help about that, too. You also started to disappear for periods of time without telling us where you were going and we’d always find you in the toilet so we were really worried about what was going on.

What made you realise that I was really unwell?

One day, I picked you up from school and I saw you walking to meet me but you were dragging your feet. It was like you just couldn’t even manage to walk because your back and stomach were sore. We were also attending your cousin’s wedding and the dress you’d bought only 1 month before was at least 2 sizes too big on the day - we noticed you’d lost so much weight really suddenly. Another time, you told me to come and look in the bathroom and the toilet had a lot of blood in it. This led to us being at the doctors’ clinic nearly every day for 2 weeks; you lost 10kgs over that period. We had never been more worried about you because they didn’t know what was going on and they didn’t know how to help you, so they were talking about referral to a gastroenterologist.

How was the process of getting diagnosed for you?

One morning you were completely passed out in bed - I couldn’t wake you, so myself and your brother had to rush you to hospital. Your dad came home from working away to be there too because it was such a serious situation. The actual process of being diagnosed took 1 month and you spent that entire time in hospital getting the help you needed because your intestines had stopped absorbing any nutrition. It was awful and terrifying seeing you so sick. Your tests - endoscopies and constant blood tests – plus having an NG feeding tube placed were so hard to watch. But hearing your bloods slowly start to improve made us less worried that we’d lose you.

What changed after diagnosis?

Life as a whole completely changed. You were obviously very unwell and there were a lot of new things we had to get used to as a family. There was so much medication that needed to be sorted 6 times per day. Mixing the formula for your feeding tube made it feel like we were constantly dealing with medical supplies. We were just relieved to see you getting slightly better though, so it was definitely worth it!

What were the years of treatment like for you?

There was a lot of time spent sitting around just waiting on things being done. Things you might not think would take a long time, like blood tests, could take hours to happen. There was also a lot of time worrying - which is only natural because you’re our daughter. It has got a bit easier since you’ve had your ostomy surgery and met your boyfriend, Stuart, though because we can all share the trips to hospital and can all help care for you.

Do you wish I’d had ostomy surgery sooner?

I think yes, when I think about everything you went through with trying all of the different treatments and the outcome being the same. But I know you would have resented your ileostomy if you didn’t try them first. It has also meant you’ve learned so much about IBD, which helps you to be a better advocate.

They’re obviously terrible on the day because we’re waiting around for up to 12 hours between you being taken for surgery and when you’re back on the ward. Once we got to see you and saw you were alright it helped ease our fears! I definitely think the proctectomy was easier because of the epidural that made your pain so much better; you were able to laugh and joke with us as soon as we saw you, so it was easier to go home that night knowing you were safe and your pain was well managed.

What do you wish you’d known before my surgeries?

I’d have asked what was best for you. Should you have got the surgery sooner and what could be done to prevent wounds splitting - because it’s happened to you after every surgery.

How has it been for you, having to accept that I won’t have the life of a “healthy” person?

I’ve learned to accept that you’ll never be a 100% healthy person but I hope there’s something in your future to make you feel much better than you do just now. It’s definitely the hardest thing watching your child be in pain, but you get through it together as a family. We’re there for you, no matter what.

What advice would you give to other “Chronic Illness Mums”?

My advice is to just be there for your child. Try to be there for every procedure, blood test and appointment, but if you can’t then make sure you get someone else to be there with them. It’s so important that your child knows they’re not alone. I’d also say that you know your own child - if you notice they’re acting differently and you think it’s their chronic illness acting up then be persistent with your doctors. There have been so many times we’ve told Jennifer’s doctors that she’s in a flare because of changes in her eating or toilet habits weeks before it showed up in blood tests. It just means treatment can start sooner! Finally, I’d say don’t let your child sugar-coat things to their team. Jennifer would pretend things were a lot better than they were to avoid admissions but I have to be the bad guy - it’s important to get things treated sooner rather than later!

How To Lose Weight With An Ostomy