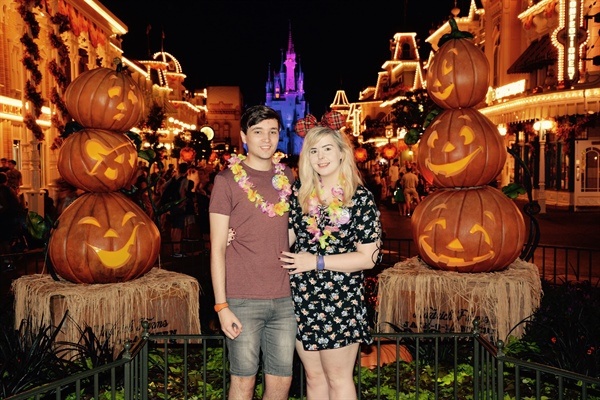 My Stoma Story Through The Eyes Of My Boyfriend

This month I thought it would be really interesting to get a different view about things by interviewing my boyfriend, Stuart, about what it’s really like to have a girlfriend with a stoma. We have been together through all of my major surgeries, so Stuart knew me before my ileostomy right through to now with my Barbie Bum from my proctectomy and scars from everything in between.

How did we meet?

We met online on the dating website Plenty of Fish.

What did you think when you saw my profile mentioned I had Crohn’s Disease and my ileostomy surgery was only 3 months away?

I didn’t know what Crohn’s was so I had to Google it. I also had to do the same for an ileostomy. Overall I guess I didn’t know the severity of your situation.

Did my illness ever make you reconsider dating me?

Not reconsider exactly, it just made me think more about if we were compatible… but I tried not to think about it too much.

What did your family think of my illness before meeting me?

They didn’t say a lot about it, I think they were more hoping you were alright because it is such a life changing illness. They let me make my own decisions about you and tried to not influence me with their thoughts.

What was it like when I got my surgery date?

It didn’t have a huge impact on me because it was surgery for you, not me, and I wasn’t going to be there on the day either. It did mean that we had to rush our Christmas plans as your surgery was on the 10th of December and we wanted to fit everything in beforehand, as you wouldn’t be able to do anything for a while after.

What was it like when you saw me and my ileostomy in hospital for the first time?

I was definitely taken aback seeing you. I had seen pictures of you and your ileostomy before I visited in person, but it was scary seeing you hooked up to so many machines because you really didn’t look great and were really out of it. You were able to talk to me though and even though you can’t remember that day, you didn’t seem as foggy as I now know you were.

Was it hard when I tried to hide how sick I was from you during my recovery?

I was worried you wanted to break up because you kept putting off seeing me and only texted a couple of times a day…  I didn’t know why at the time. Now I know it was because you didn’t want me to see you struggling to get better and that you weren’t getting better due to having sepsis – which was making you sleep 20 hours a day.

What was it like dating me when my stoma was still new? Did anything change?

It was interesting to try and get used to it, just because you can’t see it and I would forget it was there. I had to be more aware and constantly be careful with you, so I didn’t do anything that would hurt you.

Did you have any worries about travelling with me?

Honestly, no, because we were pretty used to it by the time we went on holiday for the first time. You had your ostomy for 5 months and we knew how to deal with it as a team if there were leaks, and we were used to taking more breaks.

What did you think about my fertility issues?

I suppose it is a big deal but also it’s uncertain if you’re infertile or not. It wasn’t a 100% infertile result, which gives me hope we’ll beat the odds one day even if it is very unlikely.

Did it ever make you reconsider our relationship, since I might have problems getting pregnant naturally?

No, because we have a variety of options available to us and if it came to it we could always use surrogacy or donor eggs.

What was the embryo freezing process like for you?

I felt bad for you having to do daily injections into your stomach. When I had to get my first blood test it was bad enough, so I couldn’t imagine injecting myself 3 times a day.

How did it feel becoming more involved with my hospital appointments when it came to the proctectomy?

It was better than your colectomy surgery as we could go through it together and you didn’t have to deal with it all by yourself. It helped me to feel better as I actually knew what was going on with the doctors and surgeons instead of worrying about if it was worse than you were telling me.

How did you find the proctectomy surgery?

I found it much easier to prepare for. I got to be there on the day with your mum, but the worst part for me was having to work that night and leaving you. When I first saw you I was also a bit freaked out, as you had a central line in your neck that looked really intimidating. But I felt better with you being in a good mood thanks to the epidural and medication.

What was it like being so involved in my care with my wounds, central line and dressings?

Your scar splitting was worrying as I had to be very careful not to hurt you. It took a lot of getting used to seeing your scar, but I’m glad I was able to go through it all with you because we feel like a team now.

Finally, what do you think of my scars and missing rectum?

It doesn’t really bother me, everyone has scars and you’re still the same person I’ve always known. I just see them as part of you that I wouldn’t want change!

In this interview, Jen's boyfriend reveals what it’s really like to date someone during their ostomy journey

How To Stop Caring What Other People Think Of Your Stoma