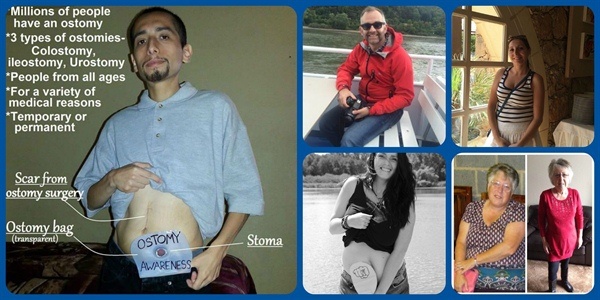 Back in 1993, Prof. Gerhard Englert, Chairman of the German ILCO, proposed World Ostomy Day after working with many people that had stomas or pouches. He hoped to draw more attention to people who live with a stoma or pouch and to the quality of life possible with one.

Celebrated every 3 years, this year’s theme is ‘Many Stories, One Voice’: a true celebration of the original idea conceived 22 years ago. No matter what country we come from or language we speak, as individuals with stomas (even though our stomas all look different) we share a lot of the same concerns but also triumphs that we can celebrate.

To collect some of these many stories into one voice, I spoke to 5 different people from the UK and abroad and wanted to share with you what they told me. Everyone involved in this blog felt that becoming an ostomate was a positive thing and allowed him or her to get their lives back. I think you’ll enjoy the similarities and perhaps get some inspiration too.

Charmaine has had her Ileostomy since 2011, after 7 years of battling Ulcerative Colitis (UC).

How do you cope with your stoma? I have a 2 year old toddler and for that reason I have become a professional at coping with my stoma, I can change a bag in less than a minute!

I change my bag everyday both in the summer and winter as in Malta it can get up to 45 degrees sometimes and I suffer a lot with irritation on the skin around my stoma site. Changing it daily keeps the area clean and healthy.

How do people react when they find out you have a stoma? I often get “you poor girl, you’re so young!” But nowadays people are more open-minded and I educate those that aren’t.

In what ways has becoming an ostomate been a positive experience for you? I can enjoy the simple things in life like playing with my daughter, swimming and going out.

George has had a colostomy for the past 11 years after suffering from chronic constipation throughout his childhood. At the age of 14 his bowel became obstructed and he required emergency surgery, resulting in a colostomy.

How do you cope with your stoma? For the first year I found it hard to manage my stoma because of frequent leaks that irritated the skin around my stoma.

Over the years, though, it has got easier, especially as my stoma is not very active. There are still times when it can become difficult but I keep a positive mind.

How do people react when they find out you have a stoma? After several years I have been more open about my colostomy, especially online where I have met many people. Everyone I’ve met is either understanding or just curious. I never expected to have such great confidence with an ostomy, as I do now. Everyone who has supported me has made me more comfortable with it.

Brenda has an ileostomy after a stricture meant surgery and part of her colon was removed. It was supposed to be temporary but once Brenda had got used to it she decided to keep it “…as it has improved my life so much” and just this week she met with her surgeon to arrange to have it made permanent in the next few weeks.

How do people react when they find out you have a stoma? I’ve only had positive reactions and many people say they know friends or family with stomas.

In what ways has becoming an ostomate been a positive experience for you? I no longer have to worry about passing wind and stool samples are now much easier! An upside is also that now I’m a normal clothes size.

Cormac started suffering from UC in his teens and finally had to have a prolectomy a year ago. It was during that operation that they also found a cancerous tumour which was successfully removed.

How do you cope with your stoma? Other than a rare leak, I manage very well. It’s been a year since my operation and at times I forget it’s even there. I change my appliance every 2-3 days and that suits me perfectly.

I stay away from drinking too much coffee and chew all my food several times over, so no blockages to date.

How do people react when they find out you have a stoma? I don’t go out of my way to tell everyone, as I never feel the need to. Those I have told have been really positive and at times surprised I have one.

In what ways has becoming an ostomate been a positive experience for you? Freedom of not having to worry about finding a toilet everywhere I go has opened up so many things I would normally have shied away from. I now enjoy photography, angling, golf and cycling as well as the purveying of Guinness!

Nicole first noticed Crohn's symptoms in her teens and, despite her deteriorating health, managed to have a healthy son. Her health then deteriorated further meaning she needed surgery to give her a stoma.

Like many of us, Nicole has given her stoma a name - ‘Charly’. She is a member of Beuteltiere - the only group in Germany solely for ostomates.

How do you cope with your stoma? Three weeks after my surgery my boyfriend asked me to marry him and of course I said yes, after all we had been through with my health.

I wore a normal wedding dress for the wedding, easily hid my stoma underneath and had no problems with it on my special day.

In what ways has becoming an ostomate been a positive experience for you? I was declared medically unfit for work and medically retired from my job but found myself with too much time and energy on my hands. So now I volunteer with a group - CED Crohns & Intestinal disease, as it scares me again and again how little people - even those that have been diagnosed - know about Crohns, Colitis and stomas.

Finally some of those interviewed wanted to share their individual message with you all, as part of their celebration of World Ostomy Day:

“I have publicly posted pictures, showing my Ostomy, in hopes of raising awareness. It’s something that I am proud of doing” George

“Encourage one another, keep spreading awareness and educate others. A kind word to others is sometimes the best medicine, encourage one another to be friends, talk and don’t be shy! Let the light at the end of the tunnel shine bright, embrace your life and live it to the full despite what life has brought to you. There is so much more the than bad things in life to focus on” Charmaine

“Don’t be afraid to reach out and ask for help or support. Becoming an Ostomate is a serious life event and at the start it is hard, but the rewards that come with it are fantastic; after you have been suffering from a chronic illness such as Colitis or Crohns. It can also be a life saver when Cancer is involved.” Cormac

I hope that you have enjoyed reading their stories as much as I did hearing and writing about them and I hope it perhaps spurs you on to tell your story or at least strengthens your resolve in living with a stoma. Happy World Ostomy Day, wherever in the world you may be!