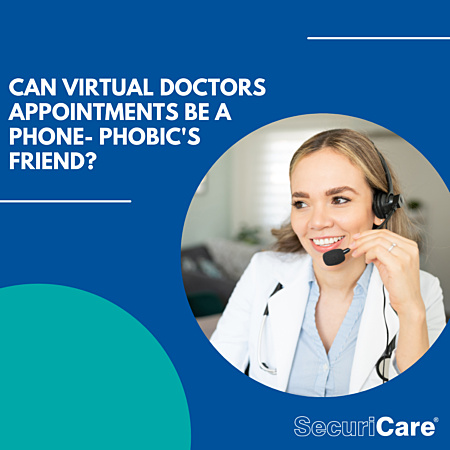 “I will admit that I have become a hermit – anyone else?” @big_british

Blimey, we are in August! It is official! The longest day has been and gone. Our Summer seems to be a mixture of blazing hot days followed by rain, rain and more bloody rain. What I can't fathom is: where has this year gone?

Covid-19 has certainly accelerated this year, and in the weeks to come we are faced with all restrictions potentially being removed, which means trying to adapt to a different world, again!

I will admit that I have become a hermit – anyone else?

The masks were OK but like a lot of people I struggled with breathing, especially on the hot days. My sympathies go to those who have had to wear them all day long at work. In the end I decided that I didn’t want go out much, unless it was a hospital appointment - I have had a few of those this year.

CT scans (with and without contrast), MRIs, bone scans, nerve conduction tests have all been done on me this year and still no answer to the horrific leg pains I endure.

I have spent most of this year at home; crafting and sleeping.

There came a point when it all got to me and I withdrew from life, and slowly retreated into my head. This was not a good place to be. After all, you can only clean so much, only watch so much telly or films, only listen to so much music.

I have also spent this time in pain.

The pain has mainly been in my legs, but I still feel the usual pains that I seem to live with daily. This time it has been little different as the pains are now accompanied with… SPOTS! Big, horrible, spreading spots!

They started on my feet and hands, and have slowly crept all over my body in the short space of 12 days. At first we thought it was an allergic reaction, so after taking some over-the-counter antihistamines from the pharmacy, we then called the doctor who prescribed some stronger antihistamines. 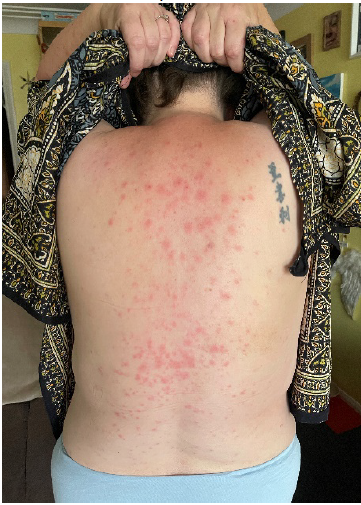 Twice I have used the 'e-consult' forms to get in touch with my GP and I have really loved it. For someone like me, who hates making phone calls, it is a fabulous way of speaking to your doctor.

All I had to do is log in via my GP’s website and click the 'e-consult’ button. It then gave the choice to carry out the virtual consultation through the website or via the NHS app. I chose the app (well, accidentally but it worked well).

I was guided to fill in an online form. Explaining why I was seeking medical help. Obviously if it is an emergency then you will need to call 999. It gives have the option to email yourself the form that you have filled in. After sending in my form, the surgery then made contact within 24 hours.

Back to the rash!

It only itches before the spots appear, with the occasional itch here and there. It makes me feel utterly awful. I feel unwell. It also appears to look like different rashes all mixed up in one. There are ‘hives’ looking types of clusters and then there are small red bumps/spots that hurt. Anyone seen this before? (Pop a comment at the bottom).

I really am getting down over everything at the moment. Today I told my husband that this isn't the quality of life that I want. I can barely function without pain or feeling utterly terrible.

THIS TOO, SHALL PASS! Gosh, I bloody hope so! 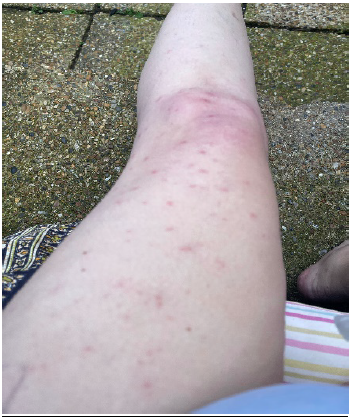 Six Tips For Sleeping With An Ileostomy Bag