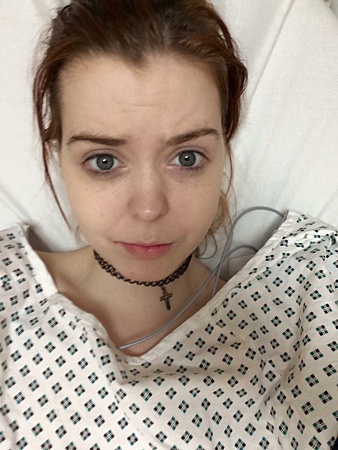 The scariest experience of my life

This month I’m going to talk about when I developed sepsis, in February 2015 after my colectomy. I didn’t realise it was sepsis until it was almost too late, and I didn’t know my symptoms were life threatening because I was convinced that feeling so unwell was a normal part of the recovery process from my colectomy. It’s taught me the hard way just how important it is to get checked out if you have any worrying symptoms.

For the 2 months following my colectomy I slept the majority of the day, was still having to take Oramorph to control the pain and had an extremely tender and bloated abdomen. I also lost 2 and a half stone. I looked and felt awful.

Then, one Friday evening, I started to get chills. My temperature was also elevated, which is normal for me when I have an infection, so I brushed it off and called the NHS 24 hour helpline for advice. I was told that I would be fine to wait another day and if I got worse to call back. So I went to sleep with a hot water bottle against my tummy to help ease the pain, oblivious to the fact that the pain was being caused by the formation of an abscess underneath one of my keyhole scars.

The next morning I noticed that the skin on my stomach was mottled and red, plus there was a bulge. I went to the out of hours GP, where the doctor looked at my stomach, took my temperature and decided it was a hernia. This was a bad turning point in the day because the doctor then decided to push the hernia back in. This led to the abscess bursting internally. I almost passed out from the pain and the doctor instructed me to go straight to hospital because I would require surgery for the still suspected hernia.

By this point, I was showing almost all of the signs of sepsis. There’s an easy to remember anagram: S.E.P.S.I.S. - slurred speech, extreme muscle pain, passing no urine, severe breathlessness, it feels like you’re going to die and skin mottling.

Still oblivious to how unwell I actually was, I headed home to pack for my hospital stay, change my stoma bag and say goodbye to my dog. As I lay on the sofa I started struggling to breathe and felt like I was dying. I called 999. The ambulance arrived really quickly and the paramedics diagnosed me with sepsis, rushing me to Glasgow’s Royal Infirmary.

Everything then went fuzzy because I was so out of it on painkillers for the next 48 hours. I do know that I was in surgery within 4 hours of arriving at the hospital and my whole abdomen had to be cleaned out because there was so much infection.

I woke up with my wound left open to enable it to heal from the inside out to prevent the abscess from recurring. The wound required daily packing for a month and I was given the strongest antibiotics possible. My family were told that all that could be done was to wait and see if my body could fight the sepsis infection, as the fatality rate is between 26% and 50%.

I was extremely lucky

My recovery took an extremely long time. I am so thankful to my amazing team in the hospital because without them I would not have survived. I cannot stress enough the importance of getting symptoms of sepsis checked out immediately as, the sooner it is diagnosed, the better the outcome!

See you next month!

Jen cannot stress enough the importance of getting symptoms of sepsis checked immediately. The sooner it is diagnosed, the better the outcome!

How I Change My Urostomy Bag