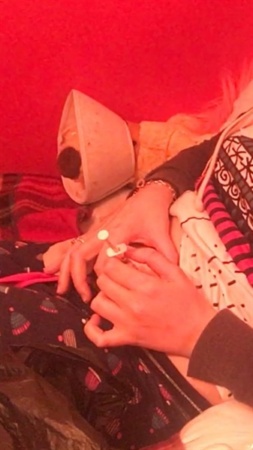 Hello again SecuriCare blog readers! In this blog, I’m going to discuss my experiences with fertility after having a variety of different biological treatments for my Crohn’s plus, most recently, a total colectomy and proctectomy.

Fertility options to consider when facing a proctectomy

I’m getting to the age now where everyone around me is settling down and thinking about starting a family. Since I’m in a long-term relationship with my partner, Stuart, babies have been on my radar recently too. I have always thought that I would love to one day be a parent. I knew there could be some fertility trouble but I really didn’t put much thought into it until last summer, when I was told I needed a proctectomy in the very near future. They made me aware that, due to my levels of disease, there could be complications which would require the removal of my fallopian tubes - and potentially the egg sacks - if there were adhesions attaching my organs together.

This left me with a few options:

1.       I was offered a referral to ACS (the Assisted Conception Suite) at my local hospital where I could find out about the possibility of fertility preservation before surgery.

2.      I could leave things to fate, go ahead with the surgery straightaway and deal with fertility later.

3.      I was offered postponed surgery (for a year) to try and have a baby in that time - but that option was not recommended because of my declining health.

It took a full month to make the decision between Stuart, our families and myself. We decided that, due to our plans to start a family in the not too distant future, it was important to us to find out about options for fertility preservation as we didn’t want to leave it to fate. We also felt that we couldn’t risk the wellbeing of myself and our future child by getting pregnant while I was still having so many issues with my Crohn’s.

We waited for our fertility preservation appointment and, once it arrived, we went along and discussed the options for egg or embryo freezing. Both of these options have roughly the same rates of success but the only difference is that, with embryo freezing, the egg and sperm are combined before freezing so you know in advance how many potential attempts of IVF are available as during fertilisation not all eggs will survive. We also discussed the pricing (which was around £3800 per round) as fertility preservation is not available on the NHS unless you have been diagnosed with cancer. Whatever route we went down, there would be health screening for sexually transmitted diseases and some genetic conditions. This was alongside injections 3 times per day for myself until egg collection, plus daily monitoring with an internal ultrasound to check the progress of the eggs to decide when they were due to be harvested – at which point, I would be sedated and the eggs collected during a minor surgical procedure.

The decision that felt right for us was embryo freezing. We did encounter a lot of “Are you sure about this?” questions, being young and unmarried, but you just have to be strong and do what is right for you! Then began an onslaught of paperwork to make sure every single base is covered - from how long you’re agreeing to store the embryos for, to what happens to your embryos if one or both of you happens to die (which is obviously exactly what you want to think about before having a major surgery!).

We were then sent away to wait until my next period arrived. When it did, I was scanned, given my injections to take away and told to come back every day to get scanned for the next 2 weeks. The injections into my stomach weren’t pleasant as it is a rather tender area for me but, really, the thought of doing it was far worse than the actual injection! The internal ultrasounds didn’t hurt at all - they were over in a matter of seconds. One downside, though, was that the injections sent my hormones a bit crazy so I was really emotional. We also discovered that I had very low numbers of eggs for a 23 year old, meaning that my chances of becoming pregnant were more like a woman in her 40s. We’re unsure if this is to do with the stress my body has been under but it made me extremely thankful I was still in a window where there was a chance of having a baby that was biologically mine.

We carried on in our little fertility bubble for 17 days until I was told that my eggs were ready for harvest the next day so it was time to come in. I was sedated and had a very fine needle inserted into the egg sacks to collect them all while I got to have a little sleep. While I was away getting that done, Stuart went away and got his sample ready and when I woke up I was told they had collected 12 eggs which were being fertilized as we spoke. I was a bag of nerves that night, waiting on the phone call to find out how many fertilized embryos we had, but luckily I was still groggy enough from the anesthetic to sleep right through. When the phone call came, we found out that 4 of the embryos had survived to be frozen which means that we probably have 2 attempts to be implanted at a later date (half are likely to be destroyed during defrosting) when I’m recovered and we’re ready to start our own family.

I’ve now had my proctectomy and I’m not sure if my fertility has got any worse since (I’ve not had any more tests since surgery to check my egg levels). Going in for the surgery, however, I had the peace of mind that I’d done everything in my power to prepare, so I had no regrets and I was able to just focus on getting myself. Luckily, my surgeon was able to avoid removing or damaging any of my reproductive organs, which is a big relief in itself because it means if we need any more rounds of IVF, I’ll hopefully have enough eggs to use my own. I am especially thankful that we underwent the embryo freezing when we did because, with my low egg count, I’m more likely to go into early menopause - regardless of if I had the surgery or not - so I could still have ended up infertile without knowing.

I know there are many people with IBD whose fertility is completely unaffected. This just wasn’t the case for me. I always just assumed that I’d be fine too, but now I think if you’re planning to start a family in the future, it really is worth checking to find out if you’re fertile or not. I know it’s one of the best things I’ve done and I don’t regret it for one second.

Thanks for reading as always,

There are many people with IBD whose fertility is completely unaffected. This wasn’t the case for Jen.

My First Period With A Stoma Bag