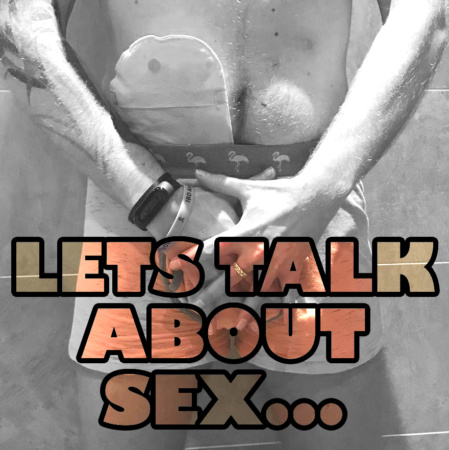 February is the month of love, and with love comes, well you know… the taboo… sex.

I’m not going to get graphic, boast of triumphs, or be crude, so it’s fairly safe to read on (!) but I am going to talk about my obstacles, demons, their unexpected arrival after surgery, and how I overcame some, yet others still linger.

My hope for this blog is that someone will connect with what I’m saying and know they are not alone.

My emergency operation left me with two stomas and a huge wound down the middle of my stomach. I wasn’t feeling very sexy at all. A month into recovery I was beginning to feel more normal. I was far from recovered, but I was finally able to move again. I was also able to see that a normal-ish life was possible.

I put this down to the catheter I had placed in for surgery. It was in for a while, and when it was removed I experienced a lot of pain. Unfortunately, I continued to experience pain and discomfort for months afterwards.

With the long periods of alone time at home, and being somewhat immobile, men - as I am sure women do too - like to find ways to pass the time. Now sex in the physical form was still a long way off for me but I had ‘time to kill’.

I’ll avoid the details, but in summary, some things worked, and others did not. Let’s just say ‘the gun went off’ but there was no ‘standing salute’. I felt pain like the catheter discomfort, but it was manageable.

Strangely this didn’t seem to bother me as much as it would if it were to happen now. I just accepted it as the norm and put it down to the combination of drugs and surgical trauma. I just thought, “Leave it and things will get better.”

Months later things were working as they should be, but I was not putting them to good use.

I was maybe eight years into married life and we’d been together many years before that. We had two children, both conceived before the operations, and my attraction to my wife has never waned. What caught me off-guard was my perception of me, from her viewpoint.

To be clear she has never said anything to me about my wounds, scars or stomas to make me think she found anything about them unattractive.

Though something inside me was sure she did. I found myself telling her how she saw me. I found myself telling her how ugly she thought I was! Or worse than that, instead of verbalising it, I’d let it fester in my head. I was hearing voices telling me how hideous she thought I was. This would cause arguments out of nowhere, and they were always instigated by me. The slightest misunderstood comment would have me flying off the handle, so to speak.

It was a testing time for our relationship.

This issue would occur in intimate moments too. A statement could be made along the lines of, “Can you move that way a little?” which for her meant she needed to be more comfortable, but the voices in my head would say, “She doesn’t want that disgusting bag anywhere near her. She doesn't want you touching her, you make her sick.” I would then react and be an idiot, and things would turn into an argument. Again, I found myself telling her what she was thinking. It was a battle I’m sure she felt she could never win.

It took a long time to get past that, and I honestly can’t tell you what changed.

Part of it was my realisation that the main issue was me, and I was projecting onto her what I hated about myself. Even now I still have that voice. If during those intimate moments a noise is made from the stoma, or I hear the bag crackle, it plants a seed. That seed starts to grow, and makes me focus on the bag rather than the job at hand.

This then causes a panic within me, an excuse for my demons to make me look at myself as this hideous thing, and then, well basically rain stops play. I still get angry at myself for letting it happen. I blame myself for letting me hate myself. This is a demon I have yet to silence.

It wasn’t until my second major operation that I had some answers to a few of these experiences.

When healthcare professionals sit you down and explain the risks, comments like “risk of impotence” suddenly make you pay attention. It turns out a lot of nerve endings and blood supplies are shared with the lower bowel, and I had no feeling down there for a few months due to trauma from the operation. It did add a concern that I might wake up one day unable to ever have sex again.

Second time round I was better prepared for recovery. I knew not to expect much in the way of action down there for a few months, but there was the nervousness of whether it would or wouldn’t work again. Luckily, I didn’t have to wait too long to find out. All was well!

Eight years on from my last major operation things still function as they should, biologically speaking. Looking back, I wish I had known the risks of surgery the first-time round. This may have better prepared me for the months of torment and anger.

I finally realised that my wife doesn’t actually find me hideous, she loves me, stoma and all.

I wish I’d seen this much sooner and that I hadn’t been so horrible to her. My wife stuck with me and took this journey, and I love her for that. Although our partners may not have our conditions, they still have to live with some of the consequences.

“My attraction to my wife has never waned. What caught me off-guard was my perception of me, from her viewpoint ” - @axtell_foley

My Stoma Journey: Next Steps