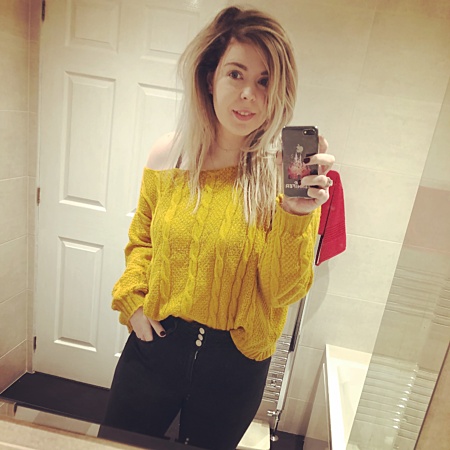 Today I want to talk to you about weight loss with an ostomy… something I’ve struggled with a lot over the last few years! I hope this can give you an insight into my life and how I try to not only lose weight, but also try to make myself feel as healthy as possible when there are certain foods I have to avoid. It’s not a perfect science and I’m by no means an expert, but this is what works for me and I hope it can work for others too.

I was one of those people who lost a LOT of weight after my colectomy as I contracted sepsis and couldn’t keep food down or really do anything for 2 months. This meant that, by the time I was starting to feel better, I had dropped 3 dress sizes from a 14 to an 8. I looked awful and felt just as bad, but I loved how my body looked as I had never really seen myself so thin since I was first diagnosed at 13. So, I assumed that everyone with an ostomy was extremely skinny and that I’d never put on weight again… how wrong I was!

I got into a really unhealthy habit of eating out all the time and eating  processed foods while at home, which did my body absolutely no good and made me sluggish. The weight started to creep back on and, between January 2015 and January 2017, I had put all of the weight I lost back on. I complained about my weight constantly but I didn’t really do anything about it because I had never been able to tolerate many fruits or vegetables before I had an ostomy. Now, however, I basically didn’t have any excuse for it other than being lazy!

I then had my proctectomy at the start of 2017 and when I was recovering things got really bad.  My diet was still terrible and, for 7 months, I really wasn’t able to do much physically. I put on even more weight so my size 14 clothes were tight on me and I was verging on a size 16, which I had never been without being on steroids. I finally decided it was time to do something about it!

Trying to lose weight with a stoma

Over the summer, I tried many different fruits and vegetables in small doses and realised that, thanks to my ileostomy and no longer having diseased large intestines, I could actually enjoy some healthier foods again in moderation. I personally struggle to digest raw vegetables and skin on fruit, so I make sure that 90% of the vegetables I eat are steamed, boiled or roasted and I also peel all my fruit and drink a lot of fresh juices and smoothies.

I’m getting my recommended 5 portions of fruit and vegetables in a day but in a manageable way that won’t cause any blockages or hurt my stomach. There are quite a lot of times where I won’t be able to manage this due to how unpredictable IBD is, but making an effort on the good days has made me feel less sluggish. I’m no longer instantly reaching for the chocolate and feel like I’m making some healthier choices. I still have lots of foods I have to avoid like nuts, coconut, corn and dried fruits because they have caused some really severe blockages, but I’ve opened up a world of foods I can eat so long as I’m smart about it!

It’s all about portion control

By autumn I had managed to lose about 7lbs, just by adding some fruit and vegetables into my diet, but I wanted to make a bigger difference. I decided that it was time to try living a healthier lifestyle by joining Slimming World for a few months. I’m not a person who wants to diet; I love food and I’m convinced that I have suffered enough over the years with not being able to eat due to pain. So, when I joined Slimming World, I had some stipulations like not denying myself anything - just making healthier choices instead. This meant that, if I was craving pizza, I could have a small individual oven pizza rather than a whole Dominos to myself.

I quickly learned that moderation is key and paying attention to portion sizes is the main area where I go wrong. Previously I didn’t do any kind of portion control! I still can’t really exercise due to having another surgery this January, but it’s surprising that just by making little swaps I’ve been able to drop a stone and a half since October. I stopped going to Slimming World meetings in January this year due to the surgery, but I feel like I now know how to make healthier choices that work for me and I don’t have to be in pain to be healthier.

Remember that what works for me might not work for you, but even by having a smaller meal twice a day, you’d be surprised at the difference it can make! I’ve got a long way to go before I get back to my ideal weight like I was after my colectomy, but by doing it in a healthier way I’m sure I’ll be able to maintain it.

See you next month!

How Do You Empty Your Stoma Bag?