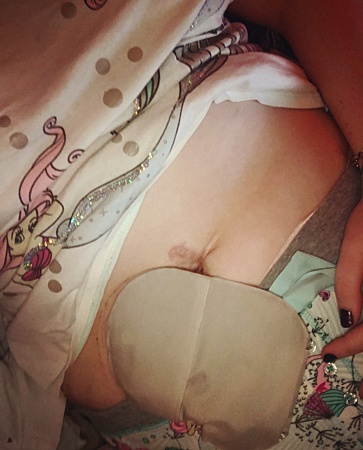 I haven’t been too well recently with a new diagnosis of endometriosis which was quite a shock, and I also experienced the most severe blockage behind my ileostomy I’ve ever had. So I thought it would be good to discuss how I was able to deal with my blockage at home, without a hospital admission.

My blockage started on a Friday morning when I was eating some melon for breakfast, I definitely didn’t chew as well as I should have and that’s what caused the blockage. I didn’t even realise there was a problem until a few hours later when I was driving on the motorway to my boyfriend, Stuart’s house. I started to feel that familiar ache in my stomach which signaled it was a blockage and I knew from that point I had to halt eating for a while and dramatically increase my fluids to avoid dehydration.

By the time I arrived about 10 minutes later, my pain had increased as I expected. I’d considered stopping on the hard shoulder but I knew once I was at Stuart’s I could get a large glass of full fat cola to try and help force the blockage out. The carbonation helps to do this, and I also hoped it would break down the melon a bit too.

About 30 minutes after taking pain relief I started to feel a bit better but I still wasn’t producing output - it would take a good few hours to pass. The suggested guidelines are that if your blockage lasts any more than 8 hours with no movement, you should go to the hospital because it might need surgical intervention!

I really wanted to avoid going to the hospital and I knew if I could keep my fluids up and get things moving again, I’d be able to stay at home.

Alongside my fluids and painkillers, I find it helpful to massage the area around my stoma because any help in getting things moving is a huge help. I also had a bath in hot water, high enough to cover my stomach, and later used a hot water bottle. All of this did the trick, and after my 4th pint of diluting juice and about 7 hours since my pain first started, I finally had some output!

There were definite signs of movement earlier because there were some crazy loud noises and my pain moved from my bottom left abdomen to the middle underneath my tummy button.

The pain of a blockage is pretty intense

An ileostomy normally becomes swollen when there’s a blockage and you probably won’t be able to see much movement of your stoma because the blockage will be stopping that but it should all return to normal after the blockage has passed.

Dealing with the blockage at home made for a long and restless day but it was my preference and I’m glad I avoided hospital. I know this is not something that might be right for you and if you notice any worrying signs like bleeding or if you are in too much pain to comfortably cope at home then you should definitely seek medical attention!

If you are struggling with pain after the blockage passes, then you should also seek medical advice because there may be remnants of the blockage, a stricture or kink in your small bowel. Unfortunately I am currently dealing with this and I’ve had another 2 smaller blockages. Thankfully those passed purely thanks to drinking cola, and massaging my stomach. The next step for me is to have an MRI of my small bowel to check for any abnormalities. I really don’t like the procedure as it involves drinking bowel prep to swell the small intestines but I’d much rather know what’s going on than deal with these symptoms for a second longer than I need to!

Hopefully by the next time I blog I’ll have an update for you all but in the meantime if you end up with a blockage remember to be vigilant and if you think there’s something wrong that you don’t feel comfortable with then please go to the hospital!

NB: If you are concerned about something that is causing you pain, please seek advice from your healthcare practitioner. If you don’t have access to a Stoma Care Nurse, you are welcome to visit a SecuriCare Stoma Care Nurse at one of these locations, or to give our Careline a call on 0808 256 5400 .

If your blockage lasts any more than 8 hours with no movement, you should go to the hospital as it might need surgical intervention!