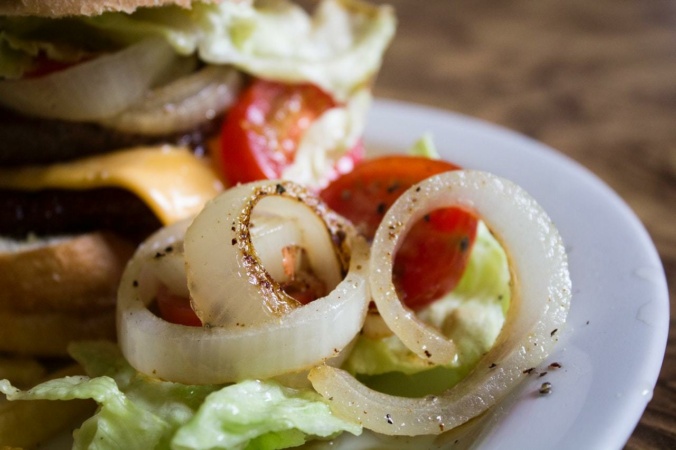 We all have different experiences when it comes to food and our ostomies because each and every one of us is individual and that, much like variety, really is the spice of life. Bah-dum-dum-tish spice/food …get it? It’s okay I’ll see myself out...

For me and my ileostomy the main culprit to avoid is onion (my trigger food pre stoma too) because eating onions means an impending hospital admission or at least several hours with an agonising blockage. Then there’s potato, because if I eat too much, I can expect pancake central in the middle of the night which is a pain in my non-functioning-bum for my high output ileostomy.

I can eat most things now without the worry of pain (except certain dairy products). My body finally has a great relationship with food, but my mind not so much…

I was terrified of eating when I first had my stoma, I wasn’t sure what would affect the output one way or another and I worried I wouldn’t be able to eat veggies again, but I needn’t have - you can even be vegan if that’s your thing! It was early on and I was reading so much conflicting information that just sent my mind into a tizz and threw food onto my anxiety list, but that doesn’t have to be the case.

I’ve had my stoma for more than three years now and I’m still not certain on which specific foods cause my output to change consistency. So rather than worrying about breaking them down I just enjoy the meal.

Fear can be a big thing when it comes to food especially for those of us that have/had inflammatory bowel disease; the cramps, the bleeding, nausea and/or vomiting after eating. Our ostomies hopefully have either removed that or alleviated the after effects of enjoying a meal.

There are still some important things to think about at meal times, such as:

I am still so unbelievably happy that I fought for my stoma and the quality of life it has given me, and one of the main benefits is being able to enjoy what I eat again.

When my brain isn’t being silly, I am a bit of a foodie. That used to mean I was miserable with plain beige foods during an IBD flare, but now I’m back eating salads, rich pasta sauces and even rice (yes seriously rice was previously off the menu)!

What does food mean to you since your ostomy surgery?

“I fought for a stoma to improve my quality of life, and one of the main benefits is being able to enjoy what I eat again.” - @colitistoostomy

Looking for ways to add more flavour to your diet? Take a look at this blog from Rakhee, Tips for an Ostomy-Friendly South Asian Diet.