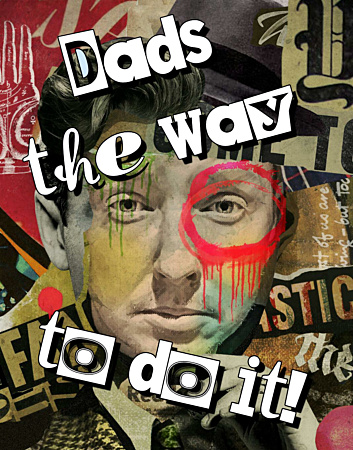 With it being Father’s Day in June, what an excellent chance to talk about my experiences of being a dad, and what an achievement that actually is when you’re living with a chronic illness.

The thought of being a dad never bothered me, I always looked forward to it.

I wanted to be the “cool dad” other children would be jealous of. I’ve been trying to be cool now for just over 12 years but still don’t believe I have hit that status.

When I was diagnosed with Crohn’s disease a year before my first daughter arrived, I found it hard learning to cope with everything the illness introduced. The medications, tests, general poor health: everything you never plan for but need to just figure out. In some cases, I’m still learning.

Then suddenly you have a new little life join you, and they become your sole focus.

I was lucky to be there for the birth. I chose to avoid using that moment to regale my wife with anecdotes of how many women with Crohn's claim it’s worse than childbirth. I thought best to save that for a future dinner party (it was a case of having to know your audience). I was lucky/unlucky enough to be the first person to change my daughter’s nappy which,  if you have done that yourself you will know, means I can never look at Marmite the same way again. It was at this moment she also decided to test my dad skills and choke on mucus, forcing me to power up my St John Ambulance training and get her breathing. Right then, I felt that I could be a good dad.

When you have a baby it’s a great reason to go out, socialise, and just be more active.

As she was a spring baby, it meant our summer was spent going out on walks and trips to the park. We loved taking her out, and I loved that I could be active. But being more active would highlight my lack of stamina and I’d get tired easily. A brisk walk would result in a slight breathless feeling, and then a desire to crash out once home. As she was getting bigger, she was more active, and I found myself reaching a peak sooner. I found I would clock watch for nap times, so I could rest too.

My lack of fitness concerned me. Sometimes I would write off a weekend just by overdoing it, even when I’d actually done very little.

I started to worry I would be a rubbish dad. I had visions of me, stood in the school playground at the end of the school day, with a walking stick, breathing ventilator, and a nurse propping me up. Yes, an extreme view, but that’s how I feared my future going. #Dramatic.

I had three weeks to get myself up to speed, trying to figure out what stomas were, how these bag things work, and if I was in fact getting closer to the playground vision I had feared.

Again, I was lucky enough to be there for the second birth, at home. I remember stumbling around trying to help, but at the same time trying not to be in the way. Getting up to move from one place to another was a task in itself.

It was a horrible time for me and my health. Things were just not working, and I was reaching the end of my tether.

My blogs about my bucket list adventures were the start of me gaining that confidence.

Yes, some were done before I had the completion surgery, but all were done with a stoma and were intended to test myself. If I could take the girls along to watch I would, and if I could get them involved even better. Okay, they may have been too young to jump out of a plane, or too little to drive a dirt buggy, but I didn’t want them to remember me doing nothing because of my illness, I wanted them to see that anything is possible.

At times the girls will throw in random lines like “I want to jump out of a plane just like you” or “I want to be like Dad.” Whilst that may not be the best approach in life, it does make my heart melt.

Having children means I can still be a big kid, and I will always try to be for as long as my health allows.

The advantage for my girls is that they have a dad who will try the things they want to try. Yes, I’ve been to pony parties and even the odd makeup party; these lashes don’t just come naturally!

In this last year we have had so many great experiences together. We have been on various bike rides, kickboxing, indoor skiing, go-karting, surfing, trampoline parks, graffiti classes and that’s just the stuff I can remember. Give it a few more years and I will see if they still want to jump out of a plane with me.

I love being a dad, and I love my family.

At times I could not see myself being a good dad. Through the surgery and recovery, I thought I would be nothing but a burden to my girls now and in later life. However, through finding the right help and support for my stoma, having a loving wife and children, and through battling these challenges together…I have the chance to achieve being the best dad for them.

Happy Father’s Day to all the great dads out there. Now, where did I put that brochure to try alligator wrestling? …

“I had visions of me stood in the school playground at the end of the school day with a walking stick, breathing ventilator, and a nurse propping me up.” - @axt