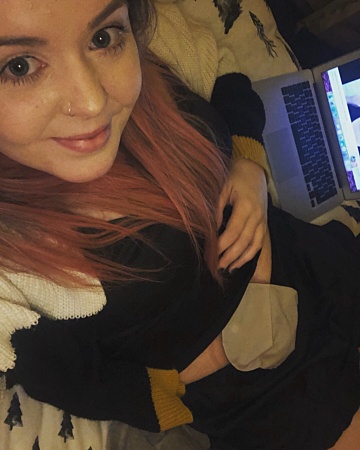 This month I would like to shed some light on what it’s like to live with a stoma as a 27-year-old woman. This should help people who are either facing the possibility of a stoma, or for friends, family and co-workers who want to become more informed, helping to diminish the taboo of poo.

“But you don’t look sick”, is a phrase I hear very often.

I’ve been hearing it for the last six years since I had surgery to remove my large intestine and form my stoma (a surgery known as a colectomy). I use it as an opportunity to educate and raise awareness, and many people are shocked to hear about stomas and inflammatory bowel diseases – they are usually invisible illnesses after all. I’ve had some very interesting conversations where I aim to help dispel preconceived notions that ostomies are unclean or only for the elderly. I also make sure people know that you can look perfectly healthy and still have a chronic illness.

I had a fairly rough time adjusting to life with a stoma when I first had my surgery, but over time I realised just how much easier my stoma made things.

I no longer need to spend hours each day in the bathroom and I no longer have to spend lots of money on (or wear) adult incontinence pants. I was completely incontinent due to the damage to my intestines and had ruined many items of clothing and underwear due to being caught short – but that is no longer an issue! I used to be so anxious about going to the bathroom outside of my home which led to agoraphobia – unfortunately I still live with this.

Ostomies are not unhygienic, having a stoma is actually more sanitary than going to the bathroom the traditional way!

Ileostomates can use drainable bags and some may only need to change it weekly. You just go to the bathroom, empty the bag and clean the little spout, then roll it back up again. It is completely odourless when closed and even when you go to empty it you can have deodorizers and sprays to avoid any unwanted smell.

Having an ostomy doesn’t limit the things you can do, in fact it often gives us the chance to do the things we couldn’t do pre-surgery due to being so ill.

For me, the biggest change activity-wise, was the ability to travel. After my diagnosis in 2007 I didn’t go on holiday for eight years – I was never stable enough. I was finally able to do so after stoma surgery.

Finally I’d like to discuss intimacy with a stoma…

Ostomates can have active sex lives and stomas aren’t a barrier to a healthy pregnancy, whereas before surgery both sex and pregnancy could be too risky for some. Being a young person with Crohn’s disease, I was anxious about having an accident during intercourse and it made me fear intimacy. I’m in a long-term relationship now (six years and counting) and we have an active sex life, I have felt far more comfortable about intimacy because I’m not worrying about being incontinent – that’s what my stoma pouch is there for!

Unfortunately, I have multiple health conditions, and due to endometriosis and the malnourishment I suffered over the years while in puberty, I am now infertile. But my stoma gave me enough confidence to undertake IVF and embryo freezing at the right time, and I hope to one day become a parent as I’m now healthy enough for those embryos to be implanted.

My stoma has changed my life in a very positive way and I want people to know that it might mean you have a slightly different life to the average person, but most stomas come with the empowerment to live the life you couldn’t before surgery – this is what my stoma has done for me and I’m very happy!

“Ostomies are not unhygienic, having a stoma is actually more sanitary than going to the bathroom the traditional way!” - @crohnieclothing

Things To Consider As An Ostomate Working In Care