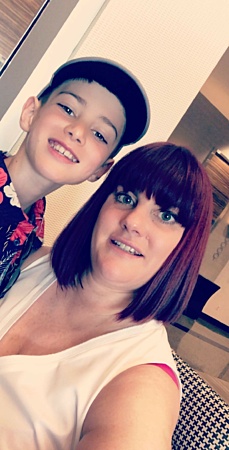 With every Mother’s Day that passes, I feel more and more grateful to my ileostomy because without it, I would not be here to celebrate.

I am also grateful to the Oliver Fisher Neonatal Unit for caring for Callum when he was born at 32 weeks (not because of my ulcerative colitis but due to pre-eclampsia). However this year I realised that I haven’t properly discussed my stoma, Gizmo, with Callum since he was about three when he so innocently asked, “When will I grow mine?” pointing at the dark red fleshy button on my stomach.

Callum is now at the grand old age of eleven. I wondered how much he understood about of Gizmo and perhaps how much I hadn’t told him?

When asked, he said he never worries about me and my ostomy because it’s all he’s ever known. Did he know why I had to have it? “They cut you open and got out your bad intestines and then they stuck your bum hole together.” …I mean it’s not exactly how I’d explain it but he gets the gist.

Still, now that he is older, he is much more aware of bag leaks. Especially when we are out. “That time when we were at the cinema, you jumped up, tipped the pick & mix on me and whisper-shouted that your bag was leaking.” I have to admit at this point of the story I couldn’t recount the occasion. “It was that film I really wanted to see and it had only just started, the trailers were still on, so you just came back from the toilet with loads of toilet paper and hand towels down your knickers,” he said.

In my defence, have you seen how much it costs to go to the cinema these days?! I wasn’t going to miss the movie, but I did opt to avoid food and drink for the rest of the film.

What does make him feel sick though is when he has to help me with a leak/explosion and he’s the only other human in a 100 mile radius. I’ll only ask him if I’m desperate and I know I am very lucky I can get him near Gizmo at all.

There was one occasion, where just Callum and I were in a hire car driving down the motorway and I felt (with the accompanying knowing dread) my bag just come completely unstuck from my belly and the liquid contents (it’s always liquid in these instances isn’t it) start to drench my lower half.

I was panicking about the upholstery and getting my deposit back, and was covered in poo-water. I came off at the next exit, which led to fields and pulled the car over. I grabbed my emergency bag of tricks and started changing myself.

Callum was an absolute star helping me with my stoma.

He held tissues on Gizmo to stop him power-spitting whilst I got everything off and a new bag on. As we all know though, that is the most dangerous job of all but he did it and I know I’m the luckiest mum for it.

So is he embarrassed that his mum has an ileostomy?

No, apparently I only embarrass him when I try to act cool around his friends, using ‘cool’ words and ‘giving it the Kermit arms’.

“Read what happened when I asked my pre-teen son about my ileostomy.” - @sonikmummy

Read more from Michelle about parenting whilst living with a stoma and hear from our other bloggers too.

Running: Why My Illnesses Won’t Hold Me Back