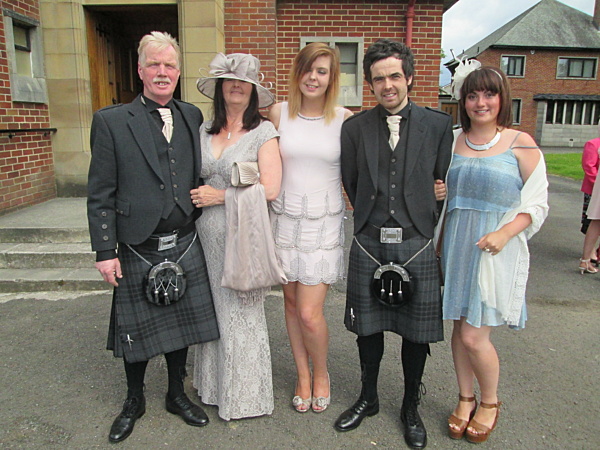 I hope you’re all as well as can be. I’m here this month with a follow on from my previous blog post, “What It’s Like For A Mum of A Child With A Chronic Illness” earlier in the year. This time I’m going to share the conversation I had with my dad where I asked him the same questions I’d asked my mum for her interview. He had a few different answers, because we talk about what it’s like for him very little as my dad is definitely a man of few words! It was so good to hear about what the last 12 years have been like for him and I hope it will be good for other dads in a similar position to know they’re not alone because I know my dad personally doesn’t have a community out there to share his experiences with and I think it would have been useful back when we were all new to the world of inflammatory bowel disease.

How would you describe my childhood before my diagnosis?

Definitely happy! We had so much fun, and we did lots of things like days out every weekend as a family and we went on holiday a lot. You definitely had a great time, with your family around you and all your aunties and cousins felt like you were their baby too.

Did you notice any red flags before my health deteriorated?

I didn’t notice any red flags. You hid a lot from me and your mum so it took a while to realise you were sick and not just going through puberty and being a stroppy teenager. We did think you had an eating disorder for a long time - which I guess in a way you did - but the fact you were getting sicker by the day definitely made it easier for you to lose a lot of weight in a short period of time. We were totally unaware for a good few months that you were bleeding when you went to the toilet and we were hurt you had to go through thinking you had cancer and not telling anyone until after Christmas.

What made you realise I was really unwell?

It wasn’t until we went to Loch Lomond for a day out. We tried to rent canoes and you went from being really excited, to very quickly changing your mind and demanding to leave and being really panicked because you were so sore and weak. We thought you didn’t want to go out with us or that you were just becoming a teenager, so we had an argument that day; I regret that now because really you were just a very unwell little girl who was scared and didn’t know how to tell anyone. This was easily about 6 months before you were diagnosed (so in the summer of 2006) and, from that moment on, we started the process of getting you to a doctor because we knew something wasn’t right.

How was the process of getting diagnosed for you?

It was difficult for me, obviously, because I didn’t want to see my little girl hurting. It was hard having the doctors not take you more seriously when you said you were in pain. They thought that you were making that up to lose weight, but they never ever thought to test your whole blood count and just checked for the basics like iron, which obviously were all over the place because you were losing so much blood. If you’d been referred to the hospital sooner you’d have been diagnosed sooner and would have probably had an easier life. I’m still unhappy with the doctors’ surgery for not getting you to hospital sooner - all we could do was tell them what was wrong and they ignored all the physical signals that we now know were so glaringly obvious as Crohn’s disease. But we had to trust them because they were supposed to be the experts.

Then it got so bad that you had to be rushed to hospital. That was definitely a scary moment; I was working away from home and had to rush back to be with you. It took 3 different hospitals to get you diagnosed because you were too young for adult services, but technically too old for paediatrics. Thankfully Yorkhill Children’s Hospital (now Glasgow Children’s Hospital) took you on until you left school at 17.

I’d never really heard of Crohn’s disease, so we had no idea what the next few months would hold; seeing your feeding tube was probably the scariest part for me. But we were so happy that you were finally able to be treated and the feeding tube quickly became normal to us. We thought things would go back to normal after a few months, but you weren’t able to eat anything aside from chewing gum which made you upset, as you were on steroids at the same time and couldn’t satisfy that hunger you felt. I really wish there was something we could’ve given you. The worst part was that, at the end of the 6 weeks, your feeding tube actually hadn’t helped you after-all and only really bought you some time before starting Azathioprine treatment.

If you could change anything, what would it be?

I just wish none of the surgeries had to happen. There’s so much guesswork - we don’t ever really know what’s going on or how to get you better but we do know that we’re going to have a lot of these difficulties for the foreseeable future. I lost a bit of confidence in the NHS as we were so let down by your GP fobbing us off with everything – if they’d diagnosed and got your Crohn’s under control sooner, you’d have been saved from a lot of pain. You should’ve been sent to the hospital, or even just a dietician’s, right from the start as they’d likely have realised it was Crohn’s.

I suppose we just have to accept it all though, because we can’t send you back in time!

What were the years of treatment like for you?

Before you started being treated as an adult, it was really tough. It made us feel very helpless because we couldn’t do anything for you. There was a lot of scaremongering online and people would try to sell us crazy diets or ‘miracle cures’ but they were really just taking advantage of people desperate to help their loved ones; luckily we were never scammed.

We were quite involved with your care team but it often felt as though we were hitting our heads off walls because there was never a simple answer, as you were one of the more severe cases. We didn’t like how the GPs just shrugged off how sick you were. We didn’t like the multiple misdiagnoses. We also realised that, even after diagnosis, you were still going to be sick. We always said we’d do anything to take your pain away; but now you will always have this baseline pain, you’ve just developed other problems on top over the years.

Do you wish I’d have had ostomy surgery sooner?

Not really, in my head there was an order of ways to do things and a stoma was the final resort because, back then, we’d never have wished for an ostomy for you. But it really was the only thing that saved your life.

How were the colectomy and proctectomy surgeries?

They were horrendous. With your first surgery, you didn’t get better and then developed sepsis so I was terrified we’d lose you. Then, after your second one, you ended up with wounds that still weren’t healing 2 years later. As parents, we didn’t really know what was happening with either surgery. You were desperate for independence, so started seeing your doctors by yourself. I’m pleased that me, your mum and your boyfriend, Stuart, now split who goes to your appointments with you – but it does mean that each of us miss different appointments and can miss out on important information.

What advice would you give any other “Chronic Illness Dads?”

Be your kid’s advocate!

Yes, you should have told us about the blood in your poo; but it was down to us to get you to the doctors every week, until you were admitted to hospital. I don’t know what would’ve happened if we didn’t push to get you seen so often. I think it’s important to monitor your kids so they’re not glamourising eating disorders and it’s also important to have an open dialogue with your kids about any health problems they may be keeping quiet.

Even now, we still have a chat about what happened at every appointment - even if there’s a week full of them - so me, your mum and Stuart all know what’s going on! Also, definitely don’t let yourself get exploited. Don’t let people prey on your desperation to get your child help, do your research and if something’s too good to be true, it usually is in the chronic illness world.