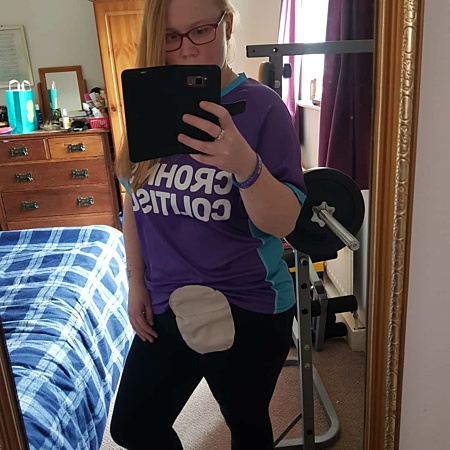 Nicola Rowson is an ostomate from Cumbria. She helps manage a community support group in her local area for people with stomas as well as those living with an inflammatory bowel disease (IBD). We spoke with Nicola about her experience and why having a local support group is so important. Read what Nicola had to say below.

After being diagnosed with ulcerative colitis in 2013, I found that life quickly became very isolating and I felt so alone.

Even though I had family and friends to talk to, none of them understood or had any experience, and I felt I had nobody. I had so many questions and thoughts in my head, but I had nowhere and no-one to turn to. I was struggling everyday being a parent, managing my symptoms and struggling with my mental health.

When I was admitted into hospital in 2015, one of the nurses told me about the Crohn’s and Colitis UK forums on facebook and Instagram.

I joined these and read through people’s stories, and was shocked by the sheer number of people living with the same condition. It was comforting to know that there were others out there going through similar things who actually understood me, but most of them lived far away. I finally had somewhere safe that I could post about symptoms or treatments without fear of being judged. It gave me a sense of belonging, even if I wasn’t speaking with these people in person.

After some time on the forums, I connected with a small number of people who I am lucky to have built good friendships with.

I realised there were a small number of others local to me and so I then felt even less isolated knowing there were people close by who I could turn to if I needed support. In 2017 I set up my own group on Facebook for people living in and around Cumbria where we could share support and help each other out. Unfortunately this little group didn’t do as well as I had hoped so I gave it up.

However after my surgeries and talking with others locally, it was decided we would set up a better managed group and in October 2018 we started the group Cumbrian Bellies.

Cumbrian Bellies are a supportive community, open to anyone in Cumbria living with IBD.

We feel there aren’t many opportunities in our area for people living with IBD and wanted to ensure that no one local feels isolated or alone. Our group is a safe place where we can share our own experiences and offer help and advice to each other. The plan is to organise regular meet ups, and hopefully in the future have our own events and fundraising activities to help beat the stigma attached to IBD. We currently have a strong community of 100 people and we are still growing.

People living with IBD are so often judged and discriminated. Some of us live in fear of embarrassment on a daily basis and often unable to lead the life we wish we could. It’s not only physical, but people’s mental health that suffers too. I want everyone in our group to feel they have somewhere safe to talk where they are understood and have a sense of belonging. Remember, you are never alone.

To connect with Nicola and join the Cumbrian Bellies support group you can follow the group on Instagram.

“We feel there aren’t many opportunities in our area for people living with IBD and we want to ensure that no one local feels isolated or alone.” – Cumbrian Bel

If you’re interested in joining another group ask your Stoma Care Nurse about somewhere local to you or take a look at the list on our website.

The Judgement Of Hidden Illnesses