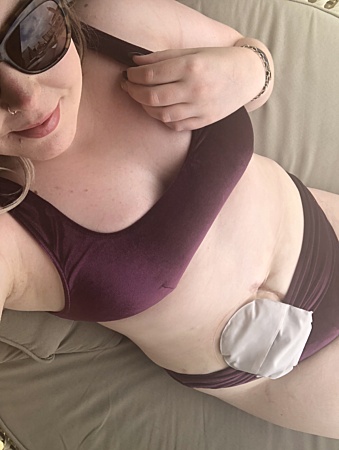 With World Ostomy Day on Saturday 6 October I thought this month I’d talk about how speaking out and raising awareness of ostomies can really change lives. It certainly changed mine and I’d love to share my experience with you. You never know, your speaking out could be the reason someone else with an ostomy or someone about to receive one might not feel so alone in what can be a huge life adjustment or even just feel more comfortable in their own skin. I hope that you’ll all join me on social media on the big day to show off your stomas and pouches, so we can speak out about how ostomies don’t have to be a last resort - they really can give you your life back!

I was offered it way back then because I was so sick and my large intestines were the worst my consultant had ever seen, but being an indignant teenager I stuck to my guns and I convinced my team that I would only ever accept an ostomy if I tried every possible alternative route first. This led to spending 8 years of my life in and out of hospital, undergoing countless different treatments and constantly living in the terrified bubble of awaiting my next scopes to see if this time it would lead to my worst case scenario… surgery.

Looking back, I was totally miserable and I missed out on most of the teenage rights of way

This included dating, parties, school and holidays so I don’t know why I felt like this was a good way of life but I really just didn’t want to entertain the idea of having an ostomy until it was life or death. Either I got my ostomy or I’d develop cancer, or my colon would rupture leading to peritonitis which would have killed me as I was so frail. Hearing how it was only a matter of time before I would be fighting for my life again I was forced into my surgery and was so terrified I refused to discuss it with anyone at all until I had no other option.

I began blogging around a year before I was told the news about needing surgery but in my head it was always a hypothetical situation rather than my actual future so the news was really difficult to take in even though I was trying to raise awareness about inflammatory bowel disease (IBD) through my writing.

I had never seen someone young with an ostomy before. Seeing her not only looking incredible but bearing her ostomy bag with pride helped me realise that this bag might not be the life sentence I always thought of it as. Maybe it wouldn’t stop me doing what I wanted after all… but I was still skeptical about it.

I also didn’t have any friends with IBD or an ostomy, until the summer before I had my surgery. I made a friend in college who became really ill all of a sudden and needed an ostomy – we of course bonded over that and we didn’t feel as alone anymore which really helped me through. If he could go through all he did and have stoma surgery so soon after diagnosis, then surely I could deal with it considering I’d had 8 years to prepare myself! Another thing that really helped around the same time, was that I joined several Facebook groups and discovered that there was a huge chronic illness community. I didn’t know any of this existed until I saw #GetYourBellyOut in my suggested groups! I was no longer alone and I learnt that my feelings towards surgery were completely natural!

If it wasn’t for those wonderful people speaking out about their ostomies, when I found them during that fateful summer of 2014, I’d never have found the courage to accept my own ostomy.

In all honesty those people saved my life. We discovered on the day I had my surgery, that my large intestine had actually burst because it was in such a terrible condition - had my surgery been even just a day later, I’d have died in my sleep because the contents were poisoning my body. I had no idea.

4 years on I’ve realised that my ostomy is my savior - I’ve been able to do all the things I’ve always wanted to do like find love, travel and earn my degree.

I’m so thankful it saved my life and I’m really glad I made the decision in 2017 to make it permanent because it’s just a part of me now. I’m now so passionate in raising awareness and showing my ostomy to the world in the hopes someone like me sees it and that I’m part of the reason they realise stomas aren’t something to be ashamed of - they should be celebrated!

I’m so hopeful that throughout all the awareness myself and countless others raise, that we’ll 1 day be in a world where there won’t be any fear surrounding stoma surgery because honestly, it’s the best decision I ever made.

“Ostomies don’t have to be a last resort - they really can give you your life back!” -@crohnieclothing

Currency And Stomas – The Unexpected Parallels