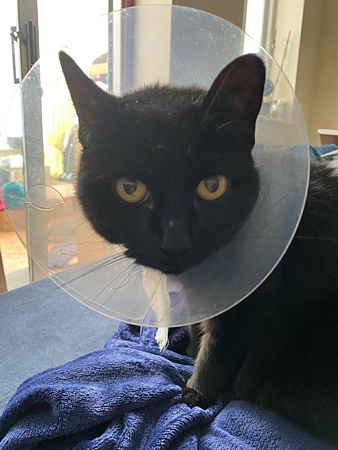 We have a 14-year-old cat called Sherpa, and she is our longest surviving pet.

As a young cat she would throw herself off anything high and land on my head with her claws out and then slide down the back of my head! She’d keep her claws in me till gravity got the better of her. When she wasn’t doing that, she liked to climb up walls, doors, curtains, like she was climbing Mount Everest and that’s why we called her Sherpa.

She’s a typical cat, only making her presence known if she wants to. She’s her own boss and we are her pets.

When I had bad flares of ulcerative colitis, I always knew it wasn’t in my head because Sherpa would make a rare appearance and lay on my chest purring while I slept.

When I got much worse and was waiting for surgery, I couldn’t stand having anyone on me, not even Callum as a tiny baby. But Sherpa would come and lay next me. Matty (my husband) calls her the sick cat, like a thermometer tells a temperature, Sherpa can tell how unwell someone is.

Since our house fire, she has understandably been clingy. She also had to be a house cat while we were in rented accommodation which softened her ways; but she’ll still bite you when she decides she’s been stroked enough!

At the start of lockdown I got really bad food poisoning and because they weren’t testing stool samples (COVID-19 override in hospitals) it took about three weeks until the doctor found the right antibiotics to treat me. Throughout that whole time Sherpa only left my side to eat and go out. She was my little nurse. Then just as we started coming out of lockdown, a local thug cat attacked Sherpa while we were all in the garden, so brazen!

We managed to get the great lump off her, but Sherpa was traumatised. She ran in the house and went into her hidey-hole behind my wardrobe, but when we checked on her the next day she was worse than the night before.

Sherpa was in shock exactly the way they describe it in movies, the lights are on but no one’s home, and her eyes were like two giant dinner plates. The vet said to leave her a couple of days and said as long as she started eating and drinking she’d be okay.

Seven days later she appeared downstairs wailing, not growling, but wailing and licking her side. There is a 50p size hole in her side and I can see three layers deep. Sherpa had hidden an abscess and now it had burst.

After we get back from the emergency vets, where they shaved her side, we could see her hole was much bigger - the thug cat had sunk it’s teeth in.

For three weeks I had to clean the wound every day and even though Sherpa had no pain medication after the first three days, she would let me rub away at this massive deep wound. She didn’t even try to escape her cone of shame. She looked pretty annoyed to be wearing it though.

However, I finally got to repay Sherpa for all her years of support and companionship through my illness. I laid where she felt safe and slept there with her while she recovered.

Side note: Like most cats, whilst I wrote this blog post, Sherpa tried laying across the keyboard, tapping my fingers on the keys, pushing her head under my hands and then finally gave up and laid with as much of her fur covering the screen as possible!

“When the ulcerative colitis flared, Sherpa would make a rare appearance and lay on my chest purring while I slept.” - @sonikmummy

My Dog Saved My Life