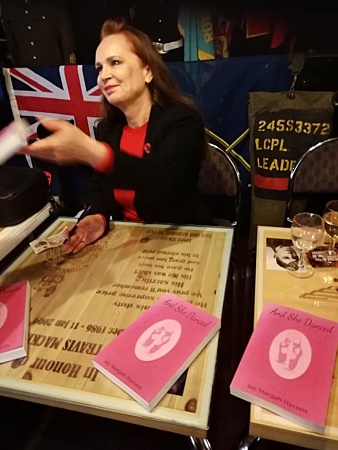 Last winter I became a bit of a recluse. Not only was I writing a book but my stoma was misbehaving. It was a really tough time which saw multiple cancelled travel plans and trips.

A vicious cycle of PTSD and IBS had me housebound and fear took over in more ways than one.

It’s not in my nature to stay in the house all day, every day. I love to travel and so, throughout the year, I gradually began to socialise again. A big part of getting back out there included giving regular talks for CliniMed and Securicare, which really helped. I went to a few places with the team and have even taken a long distance train journey for the first time in years.

Each milestone this year has helped me gain some of my confidence back, and believe me it wasn’t easy.

It was hard to accept that I had been brave enough to go to the Falklands eight thousand miles away and yet I had now somehow lost, not the desire to travel, but the confidence to do so.

Going back to my writing was basically a full-time job. I’d scrapped everything previously written for this book (the first in my planned trilogy) and had to write 112,000 words by the end of September. Writing a whole book is no mean feat! But what next?

Book signings are a big part of promoting a book and the first one was in Stockton on Tees.

I was back to the Jay of old with my trusty Aura Flushable pouch by my side. The drive took more than five hours and of course I was anxious. Some of the services on the A1 really do leave a lot to be desired - there was a wet floor and a dirty loo, but thankfully I didn’t need to change my pouch once on the journey.

Excitement began to take over. My first signing was in the place where I had honeymooned 42 years ago. Our honeymoon had to tie in with a course I was doing for a new job so it was in Stockton on Tees, not the Caribbean! The signing took place in the Don Memorial Bar and my goodness is that place something else! Poppies and poppy crosses abound along with photos, uniforms, and even a 97-year-old WW2 veteran who pops in every day!

My housemate came with me and a couple of friends turned up. It was awesome, but the loveliest surprise was to come.

A guy stood before me and I thought his face looked familiar. We got chatting and it turned out he had played football with my husband in the 1970s. The next hour flew by as we caught up – we hadn’t seen each other since 1979!

As the afternoon turned into evening, I realised that for once in a very long time I had barely thought of my stoma!

In fact, the last time I forgot about it to that degree was when I tabbed (military term for walking at a fast pace with a heavy rucksack) 20 miles across country in the Falkland Islands, two years ago! My confidence is returning and I’m sure that things won’t always run smoothly but I am no longer a recluse.

I best get on with my second book through this winter as I have many more adventures planned! In fact, I’m kicking them off with a trip to the Royal Albert Hall. Between rehearsals and two performances it will be a full-on programme for sure!

I’m getting my life back and it’s a really good feeling!

“A big part of getting back out there included giving talks for CliniMed and Securicare which really helped.” - @justjayhyrons

The first part in Jay’s trilogy, ‘And She Danced (A Little Girl’s Journey)’ is now available to purchase online.

Waking Up To An Emergency Ileostomy