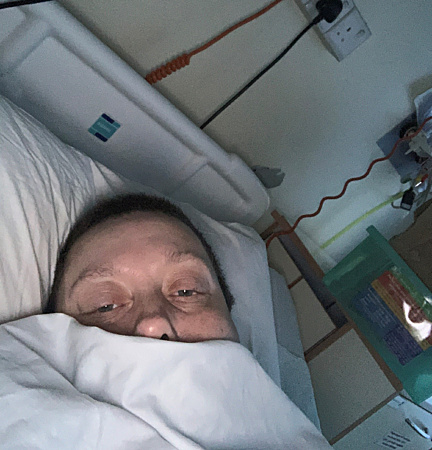 Carrying on from Anita’s previous blog: My Awful Experience With Urosepsis Part One.

So, where were we? That’s right, my Mum’s district nurse had just called 999 as I was displaying signs of a serious illness. I was protesting as the hospital was the last place I wanted to go. My brother and sister had managed to get my mum into respite care however she needed a clear COVID test done. When the paramedics came I had managed to put a facade on and the paracetamol had started to kick in, bringing my temperature down from 38.9c to 37.9c. I also had a fan blowing at me!

I wanted to wait as I had only taken two antibiotics and wanted to give it 48 hours to kick in. I was sure I would feel better, especially if everyone would just leave me alone and let me sleep!

I spent most of the day sleeping on and off, shivering, roasting, taking medications and sleeping. That was basically the next three days of my life. My darling husband came up from Hampshire to take care of me.

On day four I felt a bit better. The shivering and the roasting had stopped and I felt a little more human. My poor mum ended up in hospital as she had a fall and hurt her shoulder on the morning that she was supposed to go to respite after being given the all clear on COVID.

We came home and boy, let me tell you that I have never been so glad to see my sofa and my bed!

I still didn't feel great, but figured that I needed time to recover as we thought it was urosepsis.

On the Monday, I began to feel a little worse and my temperature was rising. All I wanted was to be left alone, the rigours set back in (hot and shivery). I kept telling my husband that I was okay and I just needed to sleep and rest.

By the Wednesday I felt absolutely awful, my whole body hurt, the pains in my kidneys were there constantly and all I wanted was some antibiotics (and to be left alone). Tim tried his best to convince me that I should call 111. My son said he was going to come and get me and take me to hospital... I think I may have told him to "sod off"!

I was convinced that with antibiotics and rest, I would be okay. I eventually gave in and let Tim call our GP but that was it. That was all the help I wanted.

The GP said he could give me antibiotics, but it wouldn't feel right for him as my temp was now sitting at 39.6c. He suggested we call 999 and get the paramedics out. It was then that I realised that maybe, just maybe, I needed to go to hospital.

The paramedics arrived, blood pressure was low, temp was high, oxygen was low and as I laid there shivering, trying to look well, I realised that they were the experts not me and I should do as I was told, so off to hospital I went.

Because I had a high temperature I was taken straight into a cubicle. From the ambulance to the cubicle, I had to put a mask on. Well, the paramedics put the mask on me as I could barely hold my hands straight due to shivering.

I was seen quickly at the hospital, my SATs (oxygen saturation) were done and they then tried to cannulate me…

This did not go well and after the nurse had tried twice, the doctor came in and managed to get the cannula in, in my wrist. I winced as he put it in but was thankful that he had managed it as sometimes it can take a while. I laid there, just wanting to sleep and to be left alone.

This was the first time I had gone to hospital during the pandemic and it was strange. All the doctors and nurses wore face masks which was great, but sometimes it was hard to understand what they were saying. I guess it was the masks and also the fact that I felt like death.

I was moved to the Emergency Assessment Unit (EAU) again. I managed to settle and they got the fluids and antibiotics into me via a drip. I was exhausted.

I was then moved to a more permanent ward. Really not sure how long I stayed anywhere to be honest, most of it is a blur. I was looked after so well and when my stoma bag leaked the lovely nurse helped me to clean up. I do remember thinking that I didn't have enough strength to change my bag, but I did it.

Only a little later did I realise that I had managed to pull my cannula out and blood was everywhere. Again, the kind nurse helped me to clean up and she decided that she would wait until the morning before trying to cannulate me again.

All the doctors and nurses were a little surprised with my stoma and some thought I had a catheter.

It was very tiresome to keep having to repeat what a urostomy is and why I had one. One of the nurses asked if it was a "poo bag" so again I had to explain, and it was the last thing I should have been doing while in hospital. I was also surprised, as this was the hospital where I had my bladder removed! So you’d think they would be more educated.

Due to the antibiotics I ended up having a poorly tummy which meant I was put into a room by myself as they staff thought I might have had a C. diff bacterial infection. This was nice though, as I was so worried that I would keep the other patients awake – Tim says I snore like a warthog!

I slept on and off. I was desperately missing Tim and had never been ill before without him by my side. I know we had FaceTime which I am grateful for, but it isn't the same.

Loneliness was rising and it didn't help that I was in a room with a sign on the door saying I was contagious! I just wanted to go home.

I was then moved to the gastroenterology ward. I questioned why I had been moved and then decided I was going to self-discharge. I was on drip, my temperature had come down and I wanted my home and my hubby.

The nice doctor explained that I still needed antibiotics and they desperately needed to cannulate me. I asked what was going on as no one had told me if I had a UTI or sepsis. This is the one thing that aggravated me, no-one had actually spoken to me to tell me what was going on. I agreed to let the doctor cannulate me again, thankfully he managed it with only two tries.

He told me that I did have urosepsis and I didn't have C. diff. So, again I was hooked up to a drip, feeling a little better. Sleeping on and off. It was day three in hospital when I started to eat a little.

The next couple of days I had wobbles, where I wanted to go home. I think this was mainly due to the lack of visitors. Times are so different now.

The corridors which were once filled with the hustle and bustle of hospital life were now empty. It was eerie. You lose contact and connections with the outside world and your world becomes the ward you are on. I cried many times out of sheer desperation of wanting to go home. The feeling would rise, like a sort of panic and would become so bad that I spent time thinking of how I could sneak out of the ward, past the nurses station without being seen.

Luckily I was able to go home on day six and I am so grateful for that. I was sent home with a week’s worth of antibiotics and told that if my temperature started to rise to call the ward right away.

Thankfully, it has been a week and I am now off the antibiotics.

I want to finish with the signs of sepsis, please always act as fast as you can as sepsis does kill. This is the fourth time I have had sepsis and I am grateful that I sought help intime and because of that I am alive.

The six signs of sepsis are:

Please, please if you spot any of the above signs in either yourself or someone else, seek immediate medical attention. You are more at risk from sepsis if you:

“Spotting a UTI is a lot harder as a urostomate.”

My Awful Experience With Urosepsis Part One