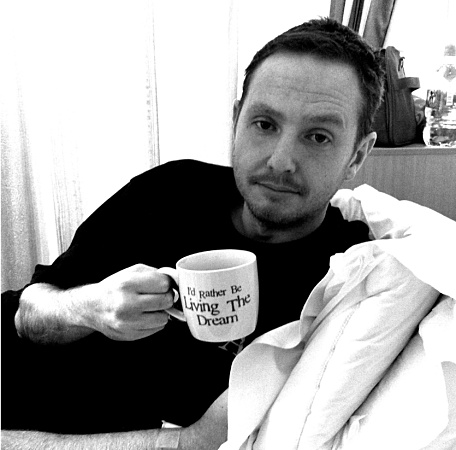 “Who is this rather glum looking chap?” I hear you ask.

Well that’d be me, Christmas 2013. In hospital. Holding one of my ironic gifts. (The even more ironic thing is that the cup is, in fact, empty).

It All Started With A Very Nutty Hospital Stay

Why was I in hospital? A peanut put me there, or rather a group of peanuts. That’s the problem with Christmas parties, the nuts are there and they are screaming, “Eat me!” It would be rude not to.

I’ve had nuts in the past, no issue. But these particular nuts decided they would form a blockage right before my stoma exit, causing pain, sickness and a lot of arguing with others (that’s me doing the arguing, not the nuts). They made me miss Christmas at home and very nearly miss New Year too. They even caused me to endure the dreaded NG Tube.

However, I am not here to dwell on nuts and their consequences. I am here to talk about The Cup.

Everywhere you go now you cannot move for signs that have a meaning, even in places like Facebook. People can find significance in everything because we choose to find truth in these signs. Even I, cynical as I may be, find myself reading them and going, “OMG that’s so true!”

Anyway, back to The Cup… “I’d rather be living the dream” is a phrase most people can relate to and find their own connection with so I’m not saying this cup fell into my hands by some miracle or act of destiny. But at this particular nutty time in my life it truly struck a chord.

A Cup With A Quote That Became My Turning Point

I was 3 years post op and living with a stoma and mucus fistula. Although I did not see it at the time, the condition ruled my life. I had sort of become a social recluse, even more so than I already was, if that was indeed possible? Having lived with a stoma for 3 years, I'd grown accustomed to it and the daily routine. Yes, there was the occasional bag leak but my main nemesis was my mucus fistula. That caused me so much more grief. It smelled, it leaked, the caps that covered it would pop off. Basically if there was a social situation where I did not want to be embarrassed then that’s when it would choose to play up, making me look like a stab victim.

The mug in this picture was the turning point. It made me think that perhaps I should not live my life ruled by my stoma. Life is too short. From then on I developed a kind of bucket list and have pushed myself to do and try things that I would never have done before.

So that’s what I hope to cover in my blog posts for SecuriCare. Each month I may discuss recent goals or reminisce about moments from my bucket list in the last 2 years, be it falling out of a plane, flying like Iron Man, zipping down the side of a mountain at 100 mph, learning the true value of a full face cycle helmet, or getting a picture published in the paper. All while enjoying my life to the full with a stoma.

'It made me think that perhaps I should not live my life ruled by my stoma. Life is too short' - Nick Axtell

Explaining Your Stoma To Friends? Why Not Try A Stoma Flash!