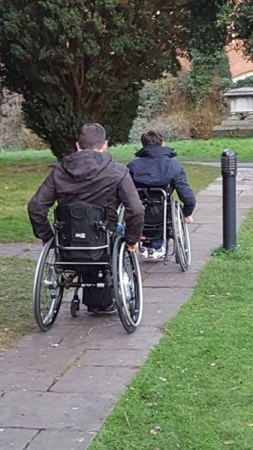 Freedom Wheelchair Skills attended the Queen Elizabeth Foundation Mobility Exhibition last year. Here I met a father of a 15 year old, John, with brittle bone disease. He told me about the mobility restrictions his son had - he could walk but in certain situations it was safer for him to use his wheelchair. He was fortunate enough to have a lightweight wheelchair but was limited as to where he could go. His independence was compromised from not having the skills and techniques to use the wheelchair with confidence and being able to manoeuvre himself assertively.

John’s father asked if he could arrange a wheelchair skills session for his son. We arranged a skills session locally to them, in a hall the father had hired. Arriving on the planned Saturday in plenty of time to set up and familiarise myself with the surroundings and local area, the skills session began.

We started with the basics

We started off with basic pushing skills. John had never been shown any techniques for how best to manoeuvre his chair and immediately picked up how to push the chair in a more productive way, from stationary and then continue moving. John has a history of shoulder problems, somewhat due to his condition but not helped by his pushing technique. The new pushing technique made a big difference to both his chair propulsion and to the discomfort in his shoulders. It also meant he could do less work as now the chair was working for him!

I continued the session by teaching effective ways to reverse and turn, making sure safety was high priority: “Look behind you and regularly check when starting to reverse and when reversing. Make sure, when turning, you are aware of your surroundings and have sufficient space to prevent catching feet, hands or even scraping the push rims against anything.”

After I was confident that John had mastered these essential skills, we moved on to more challenging ones. John could already flick the front casters up on his wheelchair easily – a skill used to get over obstacles that could potentially stop the chair. However, he needed some work on timing – flicking those casters up too early or too late could have disastrous results! We spent crucial time going though techniques and practised this until John could ascend a kerb independently. We then worked on descending kerbs safely as well, which is possibly even more important.

Stuart has an update on his wheelchair skills sessions here

Now that John had practiced these new skills in a controlled environment and asked any questions, I decided he was ready to try them in a ‘real life’ situation, outside. We left the hall and went around his local town, using the wheelchair skills learnt to maximise the propulsion of the chair and save John’s energy to be able to go further, for longer and more confidently, using his wheelchair. John was able to tackle slopes with assertiveness and lower himself down a small flight of steps with assurance.

Reflecting on the session on my drive home, I was in no doubt that John’s skill level had furthered and improved. Just the little tweaks to his techniques and building his confidence by practicing the skills had helped him advance. Receiving positive feedback is always nice: a few days after the session, John’s dad tweeted “ John has had a fantastic 1:1 wheelchair training session with Freedom Wheelchair Skills in Dorking! Highly recommend.”

With the right guidance, you can learn how to make your wheelchair work for you with less effort and discomfort

See how Stuart got on travelling around Canada in a wheelchair.

Hi, my name is Stuart, I've lived with a Spinal Cord Injury for over 20 years and use a wheelchair. I have a family and value independence. I teach manual wheelchair skills - www.freedomwheelchairskills.co.uk.

Tips For Caring For Others, When You Are Sick Yourself