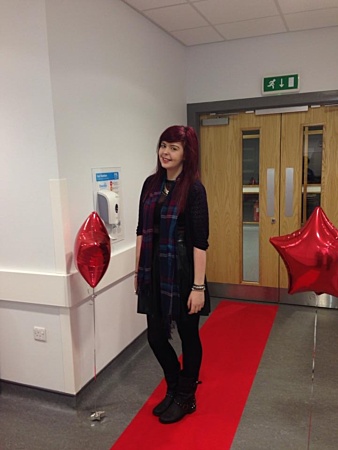 It’s around this time of year as the anniversary of my Crohn’s disease diagnosis approaches, that I get a nostalgic, slightly sad feeling as I think of the little girl I used to be. She had her whole world turned upside down and hadn’t a clue of what lay ahead.

Eventually these thoughts lead to the pride I feel in not only coping with being sick, but flourishing.

I know now that I wouldn’t want to change a thing, because that difficult time in my life was the start of a new one. A life I’m so happy to be living.

There are young kids being diagnosed today who might feel like I did at the start, and it’s because I’ve made it this far that I want to share my experiences and help raise as much awareness as possible to show them that they can have the most fulfilling life whilst also taking care of their health.

It’s important that those who are told to expect a stoma, are also informed of just how brilliant their lives can be as an ostomate. A stoma can and does change lives for the better.

I was diagnosed in February 2007 at the age of 13 but my story begins much earlier than this. I’d been showing signs of IBD for as long as I can remember and one specific memory I have was at age four in nursery. I had a really sore tummy and was crying in pain, but the other kids said they also had tummy pain and mine was probably just the same as theirs. From then on, I thought that every other kid went through the same thing and I also thought it must have been normal to cry on the toilet sometimes.

That went on regularly for more than five years, but I didn’t really have any other symptoms so our doctor just suspected constipation or that I was catching bugs at school. My mum was never really convinced that everything was okay, so she would take me to the doctors when the pain would start and by the time I was nine they were saying the pain could be a signal I was going to get my period and that explained the slight increase in how often I was getting pain. Again, there weren’t any other clear symptoms so for another few years things continued.

The frequency of pain increased, as did my visits to the doctor…

A few months before turning 13, I noticed a change. My ‘regular pain’ was much worse and there was a little blood in the toilet with lot of mucous. I didn’t tell anyone though and pretended I was fine, even when I began vomiting after I ate. It kept on for so long that I got very secretive with it. I knew there was a real problem but I didn’t want to admit it to anyone else. My parents realised as time went on and I became really withdrawn. I was spending much more time in the bathroom than anyone else and was constantly exhausted despite sleeping ten hours a night. Their worries led to months of testing at the GP.

My doctor thought my secretive behaviour was due to an eating disorder… I was being bullied at the time for being the ‘fat friend’.

It was a difficult and confusing time. The bullying made me embarrassed about how I looked but I was quickly losing weight due to my illness, so I was happy about it. It’s scary to think how damaging the undiagnosed Crohn’s was, but as I was getting comments about my weight loss and dropping dress sizes, I didn’t tell anyone about the rest of it.

It was around this time that social media was on the rise, along with the publicity of eating disorders, and I found it easy to gain information on how to hide my problems. I just wish I had known how much of an impact that would have on my life.

I wish I’d told someone I was sick because the malnutrition is probably the reason I’m now infertile.

My organs were shutting down and my period completely disappeared for over two years. Things started to come to a head as 2006 was ending. The blood increased exponentially, and I was in constant pain. Thanks to Google, I’d convinced myself I was dying of stage four bowel cancer and by that point I had gone from loving the weight loss to being terrified of telling anyone the truth, because I didn’t want to admit I thought I was going to die.

I decided in the November to keep it to myself until after Christmas and then once it was over I would tell my family. I was in so much pain, I couldn’t hide it any longer. I was just managing to get through the days, but my family were so worried and upset that they had me at the GP almost every other day.

By the time Boxing Day came around I knew enough was enough.

I called Mum up to the bathroom while I was in a bath so she could see how much weight I had really lost, and I showed her the blood in the toilet. I cried and admitted I thought I had cancer.

She rushed me to the out of hours clinic where they ran tests which showed anaemia, but they didn’t check my CRP (inflammatory markers), if they had, I might have been diagnosed sooner. They sent me home with a referral to a dietician and an appointment with my GP. I sent in stool samples, more blood tests and was monitored daily to see how often I used the bathroom, and what I was eating, but nothing really came of it. My parents really struggled with this as they could see I was getting sicker by the day. I lost 10kg in ten days and was unable to wake up one morning, only then did my GP realise I needed to go to hospital. My body was shutting down.

It was at a children’s hospital where I was told I had suspected IBD or bowel cancer.

I needed a colonoscopy to find out for sure. This all took place over an eight-week period where I was kept in hospital with elemental feeding through an NG tube to try and stop me losing weight. I was just over six stone so at five foot nine inches I was a bag of bones. I had IV vitamins and minerals and needed four blood transfusions in the space of one week. I basically went from being terrified of needles and hospitals to just lying there without so much as a flinch as I had different injections multiple times a day and countless IVs.

I’m grateful to the children’s hospital for many things but also because they decided it was best to give me a general anaesthetic for my scopes which made it less scary for me.

By the time the test results came back, I’d been in hospital for almost a month.

It was Mum’s birthday when they told me I had Crohn’s and not cancer, so we celebrated that day with cake and balloons and a party on my ward which is one of my fondest memories. It was the biggest relief to know I could be treated and that I’d eventually feel better, even though I’d caused irreparable damage to my large intestines.

I didn’t want a stoma so I pushed to try every other avenue first. I moved onto biologic treatments and everything else licensed for Crohn’s for the following eight years. I can’t express how deeply I wish I’d just had the stoma surgery then, but I know it took this journey to make me accept the ileostomy I now have.

I’m still a regular at the GPs and hospitals all these years later for various complications, but I’ve always said it’s worth being sick to have met so many people that I have to thank for being alive. I only wish I’d gotten help sooner and I’d probably have had an easier time with my IBD!

I’ve been told that I have one of the worst five cases of Crohn’s in Scotland. If I’d just said something sooner, my life could have been much easier.

I’m so thankful that I had such an amazing team of doctors, nurses, dieticians, psychologists, surgeons and everyone at the children’s hospital who did everything possible to help not only me, but the rest of my family adjust to life with Crohn’s disease. It’s thanks to them that the memories I have of hospital are always of good things like the parties we had at Christmas, the birthdays I spent in hospital being cheered up by my doctors making jokes or my nurses arranging days out for the kids with IBD, so we had peers that could relate to what we were experiencing. I’ll always have those wonderful people to thank for giving me some amazing experiences through all the hardship.

"It’s important that those who are told to expect a stoma, are also informed of just how brilliant their lives can be as an ostomate." - @crohnieclothing

Married Life As An Ostomate